A walk on the Ness of Hillswick: Splendid Isolation

The Hillswick Ness circular walk is one of the finest coastal routes in the UK. It has everything - huge cliffs, spectacular sea stacks, archaeology, a lighthouse, all kinds of wildlife including otters and a variety of seabirds. It starts next to our house. Tonight I took my allotted daily walk along the first section. The fulmars have started nesting. Spring is more than on its way. It's here. Nobody else was.

Have access to a 3D printer? Make this mask. NHS staff need protection. 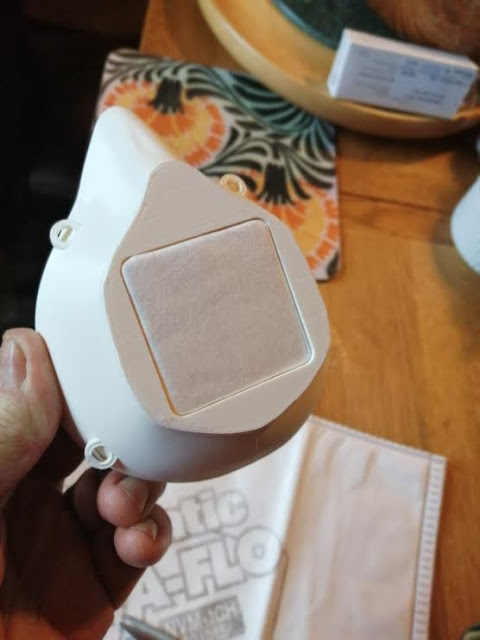 There is, despite everything, a real shortage of Personal Protection Equipment within the NHS, both locally in Shetland and throughout the UK.

Masks that will stop or at least go a very long way to preventing transmission of the Corona Virus are in short supply. If you have a 3D printer you may be able to help. The Billings or Montana mask is in use in Scotland. It's dishwasher safe.

This is NOT a replacement for medically-approved masks which protect against droplet transmission.  this DOES NOT have official approval from NHS Shetland or NHS management in Scotland. It is being recommended ONLY for LOWER RISK SITUATIONS.

These are desperate times. Official protection gear is sometimes being withheld from medical staff in case it is needed for future emergencies. And as you can see from some of the data, used with something as simple as bits of vacuum cleaner inner bags (we have used Henry Hepaflo bags) these masks can can help. They ARE a stopgap until fully functional medical masks, but the evidence is that used properly in certain situations they can be very nearly as efficient as surgical masks. 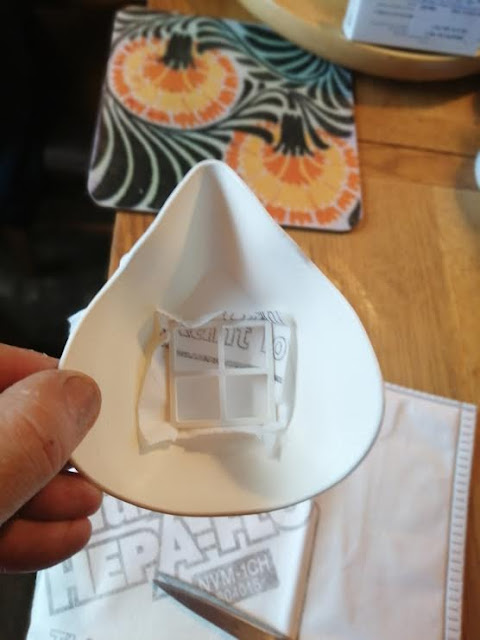 The whole thing was pioneered in Scotland by Dr Robbie Coull, GP in Strachur, Argyll, and you can find illustrations of how he deploys these masks on his twitter feed @drrcoull

He was on BBC TV tonight talking about this. These masks are being enthusiastically embraced by the NHS in England, he says, but not by NHS managers in Scotland. 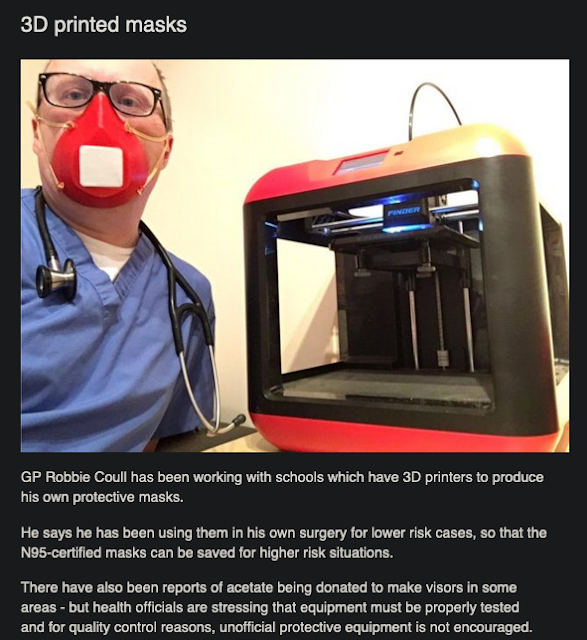 Robbie goes into detail about the masks' limitations and how they ought to be used in a tweet you can find here.

I'm grateful to Iain Waddell of RonasVoe, Northmavine, who has begun printing these masks in Shetland, and would invite anyone who has a 3D printer or access to one, and the correct materials, to - FIRST - ascertain need among NHS staff or a practice you know .

It is unlikely that NHS management will respond on an official level. You can try.

Do what Iain has done and print some out. It's taking him around four hours to print a single masks, though, so take that into account.

The data on everyday filter materials, along with some fascinating advice on more casual methods of protection, can be found here.

Instructions on making the Montana or Billings mask, including the full code necessary to run the printing program, are here.

Once printed you will need some fine sandpaper to smooth out the edges of the mask. You will also need elastic or string to hold it in place and there are adaptations using silicone sealant, draft excluder and Vaseline to make the seal against the face more efficient.

Personally, I've found that slipping the mask underneath a Buff or other elasticated motorbiking neckerchief is simple and effective. 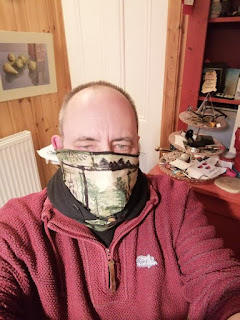 Beards do NOT work well with this mask. Or indeed any form of breathing protection.

Please note that there are many different designs for 3D printed anti-viral masks available online, and you are welcome to experiment with them. This is the one we know how to make.
Posted by Tom Morton at 10:25 pm No comments:

Shetland's South Mainland Up Helly Aa is one of my favourite events in this 22,000-strong island community. It's an exuberant, modern take on the viking fire festival theme. It's welcoming, open, committed to equality and great fun. I'm due to provide commentary for the planned live webcast of SMUHA, as it's known.

It's set to happen on Friday, with the galley being burned in one of Shetland's most spectacular locations, the tombolo (double sided beach) at St Ninian's Isle. Hundreds of guizers will march together, bearing flaming torches. Then they will party the night and following morning away at five packed community halls scattered throughout the south of Shetland, visiting each in turn aboard buses aboard which the celebrations are, if anything, more extreme.

There will be eating, drinking and dancing. There will (or would normally) be follow-up partying and loads of visits to schools and ancillary events.

It is, in other words, a near-perfect vehicle for spreading a respiratory or contact virus. And the Scottish Government has confirmed that at least two cases of the COVID-19 Corona virus now exist in Shetland. More are suspected. All known victims are in isolation.

Delting Up Helly Aa is due next week, another fertile breeding ground for infection. As is the Shetland Folk Festival at the end of April, which will see dozens of musicians flying and ferrying into the isles from across the world. Then out again.

Don't forget that one SMUHA was nicknamed FLUHA because  of the post-celebration sickness which hit many who had participated.

I know that preparations for SMUHA, have been going on for the past year, and that the disappointment at cancellation will be enormous and hard to bear. I know it's the Folk Festival's 40th anniversary and the cost of cancellation or postponement will be high. I know too that there is a kind of devil-may-care attitude among some Shetlanders which says "it's only flu. We'll shrug it off."

But the elderly and the already sick or those with underlying health conditions may not.

To put it bluntly, they may die. If one person dies from COVID-19 and that infection can be traced back to a public event which could have been cancelled, how will those who gave it the go-ahead feel?

Please, let's not allow pride, arrogance and bloody-mindedness to lay Shetland's vulnerable elderly and unwell open to this virus.

This is not a joke. It's not 'media hype'. It's real, it's in our small community and it's time to act responsibly and quickly to try and stop this virus hitting the ones who can resist it least.