"A toxic pit of snake-infested slime. And diamonds."

On loving music and hating the music industry

“The music business is a cruel and shallow money
trench, a long plastic hallway where thieves and
pimps run free, and good men die like dogs.
There's also a negative side.”
Hunter S Thompson

What do you need to make music? Well, the basics are these: you need to be alive. You need to open your mouth. You need to sing a tune. That’s it. In its primitive form, that’s music and you, me, all of us are musicians. Music is in all of us, for all of us. Maybe you grow to like hitting rhythms out of bits of furniture with sticks, or start messing about with an old piano or guitar. And perhaps that’s all you ever do. Perhaps that’s enough.

But soon enough, you catch a noise on the radio, and it’s complicated, layered, and so seductive. You see that noise being made on TV or the internet and people have all this...stuff they’re using to produce it. Shiny guitars, keyboards, gigantic amplifiers. You think: I want that. I want to sound, look, be like that. You scrimp and save or ask your parents for the instrument of your choice. You need to learn how to play, so you get lessons or books or instructional videos. You need the gear to download songs or play shiny discs that contain  music. There are concerts to attend. Festivals, tickets to buy.And so it goes.

Being a consumer isn't enough. Something in you, that same impulse to sing, wants to get your music out there, to perform in front of other people. Maybe you’ve been ill, unhappy at home, lonely, strange, bullied, isolated. Maybe you’re an egomaniacal asshole. Maybe you’re just very, very good at singing or playing or writing, or all three. So you form a band, and you need to practise, and gig, and suddenly you need to record somewhere other than your bedroom (though you’ve already invested in a Mac, microphones and some software equivalent in quality to a 24-track 1980s studio charging £50 an hour). You need a manager, and there are managers out there scouting for someone like you, because, hey, you're really good at this. They’re managers because they’re not musicians, and they so want to be. Or they want to be around musicians, they like their music, they like them. But most of all they want to make money.

And you want to make money too, because then you can  give up your job (good, bad or brilliant, it’s still not being a musician and getting paid for it). You need people to pay you, and that’s the job of the audience. But how to get that money from them to you? What do they pay you for, these days? CDs are almost dead, everything appears to be dirt cheap or free on the internet. Gigs, yes, but how do you get gigs, how do you get an audience?

And this is the music industry. And as usual, as ever, it’s a toxic pit of snake-infested slime…and diamonds.

Tell you the truth: I hate the music industry. I hate everything from the deceptive, hopes-raising college courses in how to be a rock'n'roll star  to the ruthless Let’s-Create-A-Generation-Of-Alcoholics drink marketing bonanza that is T in the Park. I hate the self-important hangers on, the music shops and recording studios (why do they still exist?) that prey on the rock star fantasies of the young; the concert promoters who rip off everyone within reach, but especially artists and audiences. I hate the arrogance of brainless teenage pop stars who think a pair of leather trousers  lends them intellectual authority, and the half-educated tattooed pontificators who imagine three bedraggled hits  decades ago lends them the right to comment in lordly fashion on everything from nationalism to naturism, Kant to Kierkegaard. I hate the fact that cheap and easy technology has meant far, far too many bad, not very good and quite good musicians are releasing 'records' or attempting to 'make it'. I hate the arts bodies who judge bands worthy or unworthy of grants, the innumerable conferences on topics like ‘portfolio musicianship’ and ‘establishing your brand’. I hate relic guitars (the selling of artificially aged instruments). I hate the DJs and  critics who won't criticise, the newspapers and magazines and radio shows so compromised by the stars they need to interview or the festivals they sponsor that all insight has been chucked out the Winnebago window for the sake of a press pass or 'celebrity access'. I hate the way so many in the media are suckered by the deadly charm of performers into thinking they're really really their new best friends. And as for the self-congratulatory awards ceremonies...not to mention the tickle me, shag me,  begging bowl phenomena like Lickstarter, Plead Music and all those other horrible percentage-for-doing it fundraising abominations.

I hate the way everyone is obsessed with the making of money. And not just making a living, but a LOT of money. The way people look back with yearning to the 70s, when half-assed guitar players were buying mansions in the Suffolk countryside, record companies had drug slush funds and bands could allegedly be ‘nurtured’ by them for years because the moguls could afford to take the long view. Which is utter rubbish, actually, as far more artists ended up as one-album failures on the scrapheap or were ruthlessly exploited and cast aside as were successful.

Just like today, the weak went to the wall. The ones who made it weren't the most talented. They were the toughest, the most ambitious, the ones with the commitment, the energy, the fitness, ruthlessness and the desperation required. And they had people around them who were just the same.

But here’s what I hate most of all: The way music, once the flag bearer for rebellion and outrage, for the hopes and dreams and loves and hatreds of  generations...once art, for God’s sake, proper, functioning creative art, has been absolutely suckered by the forces of bad business. Not big business. Bad business. The companies you don't, in your sensible moments, want anything to do with. And representatives of the ‘new music industry’ all say, well, nobody’s making money from selling records these days, everyone’s stealing music on line. Thieves! Thieves! The public are all thieves!

Ignoring the fact that this is the very public the artists must depend on, need as an audience. So, they say, we must sell the music to somebody. Let the artists be sponsored. Let them be branded, with corporate tattoos on their foreheads if necessary. Stating which company they personify the values of.

Now, the use of music in commercial contexts is one thing. It has always been the case that songs get hijacked, if the songwriter and singer is willing, for advertising, film soundtracks, TV shows. It’s bad, but it’s not an absolute betrayal, if you’re careful about which commodity you allow to utilise your creativity, and reserve the right to bite the hand that feeds at all times.

But to become the face of an organisation, to ‘become the brand’ as marketing parlance has it? If you are a creative artist, or believe yourself to be such, saying important things and dealing honestly and directly with the hopes, fears and desires of your audience, that is unacceptable. You are  Martine Activia McCutcheon or Billy Kaliber Connolly, George Nespresso Omega Clooney or any number of hapless past sell-by-date sports stars. You are nothing but an actor or a celebrity. At best a light entertainer. You have sacrificed your integrity, your work,the trust of your fans. You have destroyed your relationship with your audience and sold, well and truly, your soul.

I know. Negative. This is all rantingly negative. So. Is there a solution to the 'need' musicians have for money if they are to continue performing?

1 -Avoid the music 'industry' altogether. If you want to make music, assume you’ll be doing it for nothing and get a job to support yourself. If you’ve got rich parents, use their money. Marry someone with a decent job (this is quite common, as far as I can see, in Scotland). Be subsidised by love. And you can look after the weans as well.
2- Find a manager who, like all good managers used to, will invest his or her own money in you. And time. Who believes in you and your music, and is thinking long term. Who is honest and has great social skills. And some money, obviously.
3- Listen, if I really like your stuff, I will buy your concert tickets, put on a house concert for you, buy your vinyl records with download codes or your CDs if they come with something I can value as a souvenir. Forget all this garbage about 'making digital pay'. Put everything online in low quality for free. Capture the interest of an audience. Sell the good stuff at gigs or from your own website.
4- If you're a music fan, if you love and respect music and musicians, and you’ve got money, then think about becoming a rock'n'roll (or folk) philanthropist. There have always been people like this in music and the arts. Fans with deep pockets. But maybe there should be  a network of these folk, maybe a structure should be provided which will enable them to contribute to bands they genuinely like, helping them release music, travel, gig, promote themselves… without being enslaved by any one corporate entity.
5- This ‘philanthropic network’ would act like a non-profit record company, with an A&R team actively seeking and developing new talent. There could, but wouldn't have to be, some kind of Government involvement, perhaps fund-matching with private companies. All of whom would have the right to advertise in their own publicity material the fact that they contribute to the scheme. No individual company or person would be allowed to exploit bands for their own commercial purposes, however.
6- Don't assume you’re going to be rich. Don't give up your day job. Music is no longer a passport to wealth beyond the dreams of Beckham. Do it because you love it. Because you've got something to say. Because you want to change the world. Do it because you have to. Because you're brilliant at it. Because it's who you are. Really, do it because you don't have an option. Otherwise, stop. Or stick to karaoke and folk club floor spots.
7- Always have a back up plan.
8- Oh, almost forgot. Never, ever become the figurehead for an advertising campaign involving banks.

Copyright Tom Morton 2014. All rights reserved. No reproduction online or in print, in whole or in part without the express permission of the copyright holder 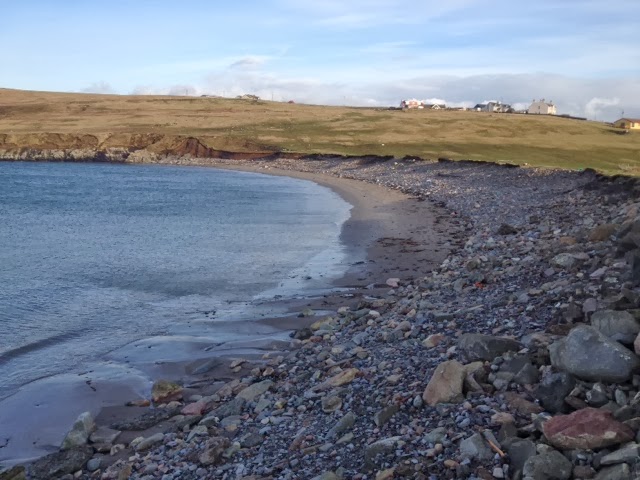 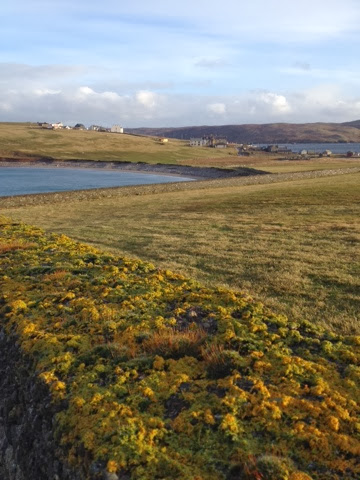 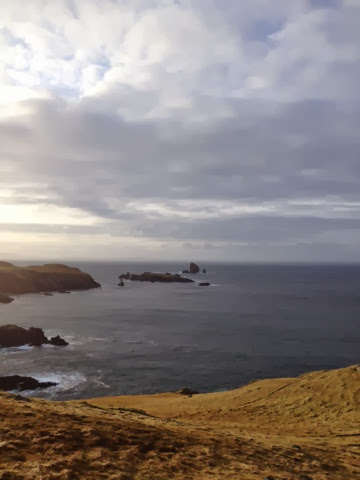 Posted by Tom Morton at 4:32 pm No comments:

I've taken, most mornings, to wandering at least part of the way along the coastline of the Hillswick Ness, which is right by our house. The complete circuit, which takes between two and three hours, is one of the great Shetland walks (stunning cliffs, beaches, sea stacks, caves, seabirds, seals, otters (if you're lucky) and more), and access is now easy and complete, with stiles and gates all the way.

We've had some strange and very calm weather these last few days (sunspot activity? Maybe) and some of these pictures reflect that. The foggy ones and the sunset were taken  on Friday, and the gate (the first one I come to on the Ness) this morning. 'Atween Wadders' is a Shetland way of describing the periods of calm you get between 'proper' weather. Storms on the way? We shall see. Meanwhile, it's a case of enjoying what you can, when you can.