St Bernards, bonxies and the best beach in Britain... 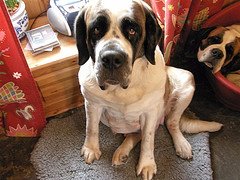 Lucy is heavily pregnant and is off to the island of Yell tonight, there to be delivered, we hope, of her (seven and counting) puppies. Doesn't she look happy? Meanwhile, I took advantage of what was probably the last fine day of the summer to do a walk I've been promising myself for nigh on 20 years - the hike out over the arctic tundra of Ronas Hill - Shetland's highest point - to what some say is Britain's finest beach, The Lang Ayre. 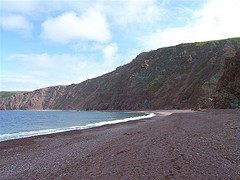 Over 1 km long, it's only accessible via a steep gully at Kettligill Head (easier getting back up than down)and it took me two and a half hours to walk there from the car park at the old NATO station on Collafirth Hill. An hour there (probably could have spent longer) and two hours back. If you're thinking of going, it's worth taking a tent and camping, as you can walk on next day to Uyea Isle, another of Shetland's great geological wonders. There's a good track from Uyea to North Roe, and from there you can phone somebody in tears and plead for a lift back to points south. Or hitch.
Shetland's many advantages over the West Highlands include fewer people, no clegs, insignificant midges (though they've been bad this past week) and no snakes. We do, though, have those marauding pirates of the sky known as bonxies, or great skuas, and I was attacked by one particular pair on the way back. Believe me, this was shot using a 28mm lens, and it was A LOT closer and closing at speed on my head. 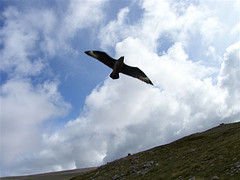 Birdman supreme Martin Heubeck told me that they very rarely hit you, and then only by accident, but bonxie attack (all you hear is the swoosh of their wings) can be terrifying if you're not used to it. A few years ago an elderly tourist was found dead of a heart attack in the middle of a bonxie colony. Very Hitchcockian.
Posted by Tom Morton at 10:17 am