After dinner, The Grill... 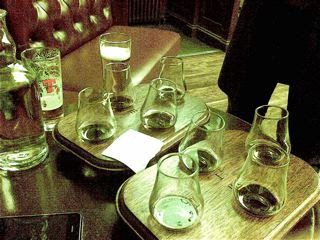 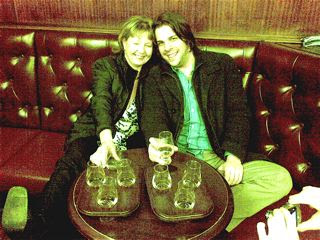 Home after getting up at the godless post-party hour of 7.00am to catch a very bumpy aeroplane ride north...I'm sorry Pam (see comments to previous post) was disappointed at the sedate nature of the Aberdeen BBC Musical Output Association's Christmas frolicking...after dinner, a few of us went on to The Grill in Union Street (a pub, not a restaurant) which possesses what is probably the most magnificent ceiling of any howff in the UK. It also has a superb array of malt whiskies, to which we attempted to do justice...you get trays of whiskies named 'A Tour of the Highlands' and whatnot. There's a menu as thick as an encyclopedia, containing only whiskies. What can I say? I can tell you that Bruichladdich Infinity is probably the most horrible whisky I have ever tasted, certainly at 4 quid a dram...and that you can see Matt and Jenny in the picture...but after a while I was quite unable to discern the differences between Glengarioch and Old Pulteney, which is shameful, really.
Posted by Tom Morton at 12:59 pm

these pics are better - more like the Christmas party spirit (excuse the pun). What?? you paid 4 quid a dram for an Islay malt - that's equivalent to about £100 a bottle! I've had an opened bottle of that malt for years and, as I couldn't get rid of it to visitors, tried adding it to water to clean the windows - it's quite good - but add to cold water, rather than hot as then it smells like a toddy! You've just made me realise what an expensive product I've been using to clean my windows!

Whit!!! Females in the Grill???? There wasn't anything as new fangled as that the last time I was in there ....

Now as West Coasters, we knew Aberdeen was expensive, BUT ... when we looked, the new, very green barman had poured 2 HALF PINTS!

However, discretion eventually pulled through and won out over that paticular bargain - and we lived to tell the tale.

Yes, the price of a dram can catch you out, specially when you're a stay-at-home parent of many years habit. Late into the night at a recent wedding at Ardoe House (there's way posh, even for West Aberdeen...) there was talk among the assembled finery of getting tanked into the malts, and I was aware of the words "eighteen", "year", "old", "highland", and "Park" being about-bandied. That's for me I decided, and headed to the bar. With the drink ordered and dispensed, the price? EIGHT QUID, for a Quarter Gill (I've been in the central belt too long). The 'Park had somewhat lost its tang. Good job I'd not been tempted by the fifty-year old (I'd misheard it as "15-year-old" - so close, shiver....) Macallan. Cost of the nip?
£250!

Fantastic stuff, folks! Pam, the folks at Bruichladdich will be THRILLED at Infinity being used as window cleaner...David, two half pints of whisky and a beer for £9.80...those are off licence prices! And Steb, I once asked for a bottle of 50-year-old HP instead of payment for some speechifying type work...not knowing quite how expensive it was...the white-faced PR person involved eventually asked if they could just pay used notes in a plain brown envelope as usual with broadcasters...