...and it's goodbye from The Radiocroft; good afternoon again from the Palace of Sheep 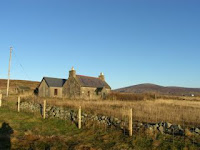 Well, it's been looming for the best part of six months, but on Friday the decision was taken to stop broadcasting from The Radiocroft. The official line is that we're 'resting' it, but after five broadcast-threatening (and in three cases, broadcast-destroying) failures of the ISDN line, enough is enough. My confidence, and the BBC's, in the technology's stability has been shattered.

I can only pay tribute to the Beeb's forbearance. The Radiocroft was my idea, and it's my (several thousand pounds' worth) studio. I think the idea of doing a music show beside a peat fire from a remote, seaside croft house has proved really attractive to listeners over the past five years, as well as allowing me to avoid a daily 74-miles round trip to Lerwick.

The Palace of Sheep is my nickname for Lerwick's 'Studio Seven' ( I have no idea why it's called that; there are only two) at BBC Radio Shetland in Pitt Lane. It's a 'self-op' studio often used for contributors to news and chat programmes. And it uses old-style BBC 'music lines' to connect with mainland, which I always see as great brass-cored 19th-century telegraph cables winding along the seabed. Not ISDN, although we have that as a backup.

The Radiocroft functioned reliably until this year, when the ISDN installation at the local telephone exchange began to fail with monotonous regularity. ISDN is different from broadband, which has replaced it for almost everything but broadcasting: ISDN is a high-quality, secure (hah!) one-to-one digital connection. You share that quality, that connection, with no-one else, unlike ADSL broadband, where quality varies according to how many folk are online. Although ADSL is used for remote radio broadcasts, the quality is not up to BBC standards. And it's unreliable.

Anyway, ISDN used to be reliable. Now it's not. Every lightning storm knocks the system out. Power cuts can do the same. Why? My one fellow Shetland user of ISDN believes it's to do with the Marconi equipment now used exclusively by BT; the old Motorola cards were more robust.

I want to pay tribute to the BT engineers who have, in all weathers and with great speed, come to fix the failures. Alas, though, Thursday's was the last straw. A blink of lightning at 14.40 and we were off air. I decided to drive into Lerwick while records and an 'apology loop' were played in from Aberdeen and Glasgow. The drive was a total nightmare, through ice, snow, hail, rain and high winds, and in a highly tense state, and afterwards I was forbidden from doing anything similar on health and safety grounds. And quite rightly so.

But what I was really conscious of was failing the listeners. The whole point of this kind of live radio has to be its reassuring reliability. To be always on, when expected, sounding like yourself. And not a shattered, breathless wreck fresh from The Ice Road Truckers Experience.

So from today, it's a trip to Lerwick. Probably by bus a lot of the time (roughly a fiver return) and only for three days this week, as there's no show Christmas Day and Boxing Day.

I can't complain. The Radiocroft has been fun - lots of memories: recording with Mark Radcliffe, a host of fiddlers playing live, the dawn-to-midnight midsummer special, chasing sheep from the lawn during the news, visitors barging in and refusing to believe I was on air, helicopters hovering overhead and having a second-hand bookshop operating downstairs for an entire summer. Most recently, Lulu the St Bernard being hugely disconcerted by my two-hour conversation with someone invisible.

The show must go on, and it will. To the Palace of Sheep!
Posted by Tom Morton at 9:35 am

That is a pity Tom, I must say it was nice thinking that you were in the croft and not a impersonal studio, I think it did add a feeling of warmth to the show. Your frustration has been obvious and it is surprising that something cannot be done by BT to provide a trustworthy connection - but then I know nothing of technology so.....

Drive carefully when not on the bus! I have no doubts the music will continue to be superb.

Never mind Tom,surely a good reason to buy one of those frugal(aye right) two wheeled contraptions..one with an engine under yer jacksie i mean!
I'm sure the show will remain as braw wherever you are broadcasting from.
cheers,Ducati Col

Tom. The only plus side I can think of is an opportunity to us your GS1000 (or whatever your lastest motorcycle may be) daily on a 76 mile round trip through fantastic scenery. Keep up the good work

well there you go let down by king DIGITAL . Now go get a nice 100KW Medium Wave TX and you will be free free free I tell you!!!!

Laid low by a combination of BT and Jehovah. Perhaps you put your trust in the wrong places?

As long as there is a contingency plan why change things ?

If it is something that was expected to happen from time to time, I think most listeners would accept that.

The programme would be great wherever it was broadcasted from, but the ' Radio Croft ' just completed the whole experience.

Very sad to see it go.

Just another way that the world is getting less interesting! I always liked imagining you sitting by the peat fire, looking out your window. -Hope Rider from Little Rock, Arkansas

Bloody BT.Typically always going for the cheap option.
Is there nae chance of a resurrection for the radiocroft?

Ach well. All good things must come to an end I suppose but it does seem ridiculous that in these days of always-on wireless internet and 24/7 everything else, no-one can find a way to make this work.

As "hoperu" said above there, another way the world becomes less interesting.

We will - as will countless others - continue to listen regardless. Maybe you could record a wee spoken word podcast from the radiocroft and stick that up on your own website? Just a thought...

Thanks folks.
A podcast has been on my agenda for ages, and in fact a Tom Morton podcast was on iTunes for a while two years or so ago...it'll be part of 2009's activities I think.
Was in the Radiocroft today and it was all looking a bit sad. However, if I sell all the gear I could afford a new guitar!