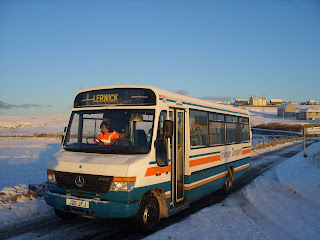 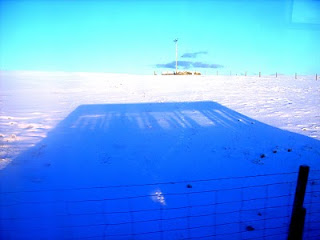 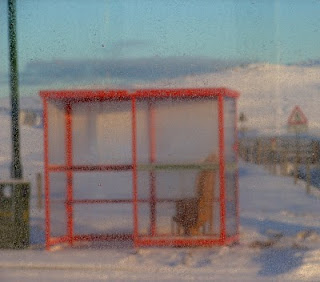 Fed up with wrestling The Mighty Isuzu through the White Hell, I decided to get the bus today. Which, despite the conditions, has never stopped running the 35 miles into Lerwick and the 35 miles back. £5.40 return. Ginny, intrepid driver, joined me in praising our gritters and snowploughers (ploughees?) for the fine job they've been doing in Shetland. I know it's not the same in other parts of Scotland. We count our blessings!

That's the shadow of the bus as we whizz past the sundrenched snowfields. But by the time we reached the Ollaberry junction, the windows were too dirty and salty to give anything but a ghostly hint of the strange wicker throne in the bus shelter. It's for an ancient ritual I'm not allowed to talk about.

I fell pleasantly asleep for about half the journey there, and half the trip back as well. Which it's not really advisable to do when driving.
Posted by Tom Morton at 7:23 pm