The ugliest building in the world 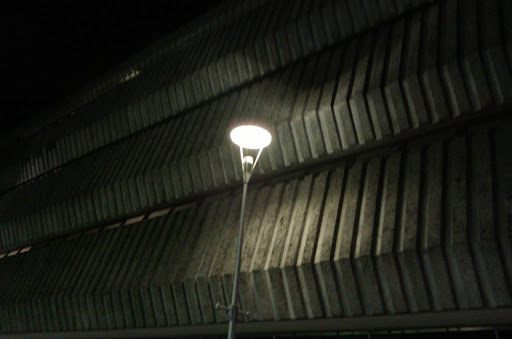 Aberdeen at night. What is this monstrosity, you may well ask, if you're not au fait with shopping in the granite city? A car park? An alien spaceship of the most implacably warlike mien? Perhaps it's one of those nanotech  buildings described by William Gibson in the Bridge trilogy, or a nuke-proof governmental bunker?

Wrong on all counts. This is Aberdeen's flagship John Lewis store. A triumph of massive brutalism, it's Thatcherism made concrete, a stamp-on-your-face statement of  what capitalism really means to the consumer. That cuddly old John Lewis, with its share options and staff ownership, should be inhabiting this 20th Century Castle Greyskull seems somehow...rather appropriate.
Posted by Tom Morton at 6:07 pm