Shetland goes it alone with £1.4 million superfast broadband project...with a little help from the Faroese

Here's the deal: The Faroese equivalent of BT, Faroese Telecom, has, at vast expense, laid a state of the art, undersea fibre-optic cable between the Faroe islands and the UK. It crosses Shetland, down at Sandwick. BT, however, won't connect the local system to it, preferring to use a hopelessly outmoded, unreliable and deathly slow microwave link between Shetland and Orkney, which is forever breaking down. Oh, and the BT guys who used to know how it all worked have mostly been 'let go', so when it breaks, as it did before Christmas, well...

Fed up with all this, and seeing huge economic advantages in having superfast data speeds in the islands, Shetland Islands Council has funded the Shetland Telecom project, to the tune of £1.4 million. This will wire Shetland to the Faroese cable using fibre-optic links running the length of the central mainland, plus a subsea cable off the west coast.

Small, community broadband projects will link to this, and major data processing and storage companies have already expressed an interest in moving to the isles as a result. Costs are expected to be recouped just from the connection of council, NHS and other public buildings to the new network. Mobile phone coverage, streaming video, broadcast data connections...all will be among the fastest in the country. I think we can expect BT to either jump on the bandwagon pretty damn quick, announce that hey, they're connecting to the Faroese cable after all, or start muttering savagely that Shetland Telecom isnae fair, and that the council should give them the money instead.

Anyway today, the work began in earnest. A £55,000 machine called the Ditch Witch is cutting a micro-trench and laying the cable along one of Shetland's busiest roads, at speeds thought impossible until now. The Ditch Witch has never been used in the UK before and can lay up to 600 metres of cable a day. 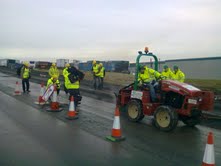 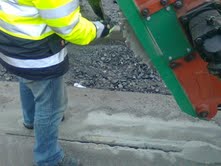 I was there. I was impressed. And I'll be even more impressed if, one day soon, I can broadcast once again, reliably, from The Radiocroft, abandoned due to BT's refusal to provide reliable digital connections. Bitter? Me?

BT should hang their heads in shame. 30th in the world behind such 'superpowers' like Lithuania
Latvia, Estonia,etc,etc. Scandalous. See the table here. http://www.netindex.com/download/allcountries/

Oh and it was Edinburgh that paid the lions share for the present 'up to 8Mb/s' speeds in some parts of the Highlands and Islands.

(But thought your schools,etc would be on the Scottish Schools and/or the UHI College network?)

Could you sort out the broadband in Kentish Town please - I am stuck with BT. I suppose I will just have to move from north London to Shetland to get decent Internet speeds...