I find myself doing something I swore I'd never do again. And it has stopped. It stops now, right here, with the customs duty paid on that absolutely beautiful 1960s Airline H929 (AKA Stella H929, as played by everyone from Blind Willie Johnson to Elvis) when it finally arrived this morning from the USA, where it was made. 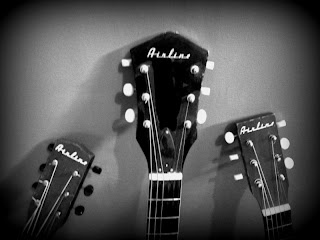 I already have an Airline. In fact, I already have two, one of them also an H929 (small bodied, all-birch, floating bridge, no truss rod, 'metal reinforced neck'). The other one was supposed to be a 'working' guitar. It's a lovely 1960s Airline-badged Harmony Sovereign H1260, with original machine heads and thus just a wee bit unreliable tuning-wise to rely on live.

I don't really know how this happened. I just became kind of interested in the Harmony company, initially because these are the last(only) vintage American acoustic guitars you can find at affordable prices, though they've started climbing steeply. You're into four figures for even the clattiest old Martin or Gibson. My guitars were all made in Chicago, Illinois, by the Harmony or Valco company who also made National resonators and that red plastic JB Hutto model you used to see jack White playing in The White Stripes. They were never expensive, in fact downright cheap, and Valco/Harmony turned out these instruments for a variety of third-party retailers, notably the mail-order company Montgomery Ward, who used the Airline moniker.

But if you're careful and/or lucky, you can still find ones that play well and sound good. The opening acoustic bars of Stairway to Heaven were played on a Sovereign and Ralph McTell, Rab Noakes and Dick Gaughan all used Sovereigns in their early years. Mine has a big, expansive Gibson J40/50 sound and a very similar, D-profile neck. It's had a neck reset but little else. Apart from what look like household clatters, it's been virtually unplayed for half a century. 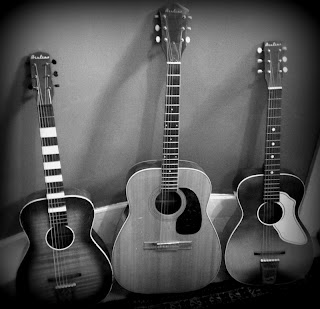 If you want that proper bright, frosty blues sound for slide and open tuning, though, you need the smaller guitars. The H929s were cheap and absolutely everywhere in the States from the late 1930s onwards, which is why they became synonymous with early acoustic blues. I have a glorious H929 (the one without the pickguard) set up for slide in open G tuning, and it really has that quality Clive James called 'broken bracken in a frost'. It's been carefully restored but has the original machine heads (though not he ferrules, which always fall out). I used to have a 1939 Harmony archtop (round soundhole) which I sold on, and an incredibly low-action Stella H929 sunburst I passed on to my son Dave.

The third and final Airline, the end of collecting, is the one that arrived this morning. It has a white pickguard and came from the USA, where at one point more than half of all guitars sold were made in the Valco factory. They went out of business in 1968. This one is in fantastic playing condition, but has replacement machine heads (again, no ferrules!). Good action.

You can buy brand new Airline-badged electrics and semi acoustics made in China and South Korea by the Eastwood company. But the original guitars are the ones to look for, badged Harmony, Stella, Airline, Supro, occasionally Fender (they did sub-contracting work for both Gretsch and Fender) Regal, Silvertone, National Oahu and a few Kays. You have to watch for the post-1968 Kays and Harmonys. The Kays are all terrible, but the Korean-made Sovereigns (all with pin bridges) can have their moments.

Prices? Importing from the USA using eBay, including postage and customs, you could get a really good restored H929 for less than £300 from a dealer, though these prices are going up all the time. It'll be £300-350 for the same thing in the UK, but they're rare in this country. Unrestored and potentially dodgy H929s can be picked up more cheaply - and they're usually repairable, as the necks can be reset straightforwardly and these are simple ladder-braced guitars. Sovereigns are another story. Bad around £300, really good maybe £500 these days. Jimmy Page casts a long shadow.

But these are all increasing in value, can be playable investments, and pieces of genuine history. Watch Jailhouse Rock and you'll see Elvis with an H929. They look seriously cool. They're American. And, to quote Clive James (via Pete Atkin) again: 'There are dead men still alive in these guitars."