Spirit of Shetland: Exclusive interview with the man behind the UK's most northerly distillery 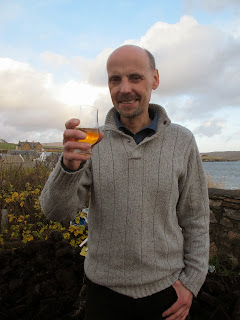 Stuart Nickerson is the man behind the second attempt to establish a Shetland whisky
distillery, at the former RAF Saxa Vord in Unst. He means business. And he has the
experience to back up his plans. He spoke exclusively to Shetland Life Magazine about the possibility of being up and running within two years, making gin as well as whisky, and why Unst is the perfect place for a distillery.


Can you tell me a bit about yourself? What are your
credentials for setting up a distillery?

I left university back in 1979 – I did chemical
engineering – and joined a processing equipment
company, Henry Balfour in Fife. They serviced the
whisky industry, mainly buiding mash tuns and
evaporators, and as a result I visited a few distilleries –
Bunnahbhaiin, Convalmore, Rothes – and I just fell in
love with the industry. It might have helped that there
were a few drams on offer each time I went! It was
fabulous.

The next minute an opportunity came up to join
Bells as it was in those days, an independent company,
at Dufftown. I joined them as a chemist, theoretically,
but basically worked as a chemical engineer across
four distilleries. I took over Bladnoch (in Wigtown) and
got that back working for them. Then an opportunity
came up to become manager at Highland Park in 1984,
and that took me to Orkney for three years. Highland
Distillers then asked me to move to Glenrothes, so I
took that on until 1987, when I spent a couple of years
at Glenglassaugh. Due to the lure of some extra pennies
I joined United Distillers as project manager, looking
after all their malt distilleries. I loved that so much I was
there for 15 months! Draw your own conclusions.

In 1990 I went to work for William Grants. I
was that company for 14 years, and that probably tells
you how much I liked William Grants! So I was there,
general manager at Glenfiddich-Balvenie-Kininvie
for five years before moving down to Girvan where I became
general manager for a year. For the rest of my
time at Grants I was Distilling Director for the whole
company.

By 2004 my kids had left home – it was mutual
decision, shall we say, that I leave Grants and that
was when I started up on my own, running my
own business, the Malt Whisky Company, initially
as a consultancy. A couple of years down the line
I was asked to look at purchasing a distillery for
some investors, and I approached Highland about
Glenglassaugh. I bought it on behalf of those investors
and then managed it for five years before it was sold to
Benriach earlier this year.

Since then I’ve been running the Malt Whisky
Company and it’s going very well – the consultancy
in particular as so many people are wanting to build
distilleries at the moment! I’ve also started trading
in casks, to a small extent. Mostly I deal with two
independent bottlers overseas.

Why consider a distillery in Shetland?

I’d only been in Shetland once, when I was asked to do
a bit of work on behalf of the previous business that
was trying to set up a distillery – that’s Blackwoods,
Caroline Whitefield. I had a look at the water source
on her behalf, had a quick look at her business plan
and I saw great potential if the business plan was done
properly. Coincidentally, I happened to hear from Frank
Strang (owner of the RAF Saxa Vord site) earlier this
year, and he was keen to the resurrect the idea. We got
together and we’ve seen an opportunity to build a wee
distillery.

Because it is the last
remaining part of Scotland that doesn’t have a distillery.
And it is the most northerly – it’s got a fantastic USP.
And once you get to Shetland – I’ve lived in Orkney,
I’ve lived all over the mainland – but Shetland has
something unique, definitely.

You’ll have to bring in barley, but what about natural
resources?

The water supply is very good. Unst water – no problem
there. But it’s the people. everyone’s so interested,
and that for me is very important. There’s no point in
making a product if you don’t have the people beside
you who want to sell it. Every single resident as far as
I can see in Unst – everybody I’ve met – seems very
enthusiastic.

Will there be a tourist element to the distillery?

There won’t be a lovely big fancy visitor centre –
because we just don’t have enough visitors up there.
But there will be a tourist element, so that people
can see round. Snd we’ll try and sell things to people
as well. Another thing that attracted me is that right
next door we have Valhalla Brewery and just having
somebody with that experience next door to you is very
helpful. Plus the fact that there will be some synergies
between brewing and distilling we can build on.

Didn’t it used to be illegal to have a brewery and a
distillery so close together?

There are lots of things that used to be against the law,
and no longer are! Illicit distilling is certainly against the
law – we won’t be doing that!

How many folk will be employed?

Initially only a couple of people. But they will have a lot
of responsibility and an incredibly varied job. I think
we’ll have lots of fun.

Will all the product be tankered south? Will it be aged or
bottled in Shetland?

The plan is to have a warehouse and a small bottling
hall – nothing elaborate. Everything we did at
Glenglassaugh was hand bottled until we were taken
over by Benriach. We were doing over 2000 bottles a
year there – so if we could do that out of the kitchen of
an old house we can make a better bottling proposition
here.

Have you any ideas about what the whisky you make will
be like, what it will taste like? Will it be a peaty malt?

The plan is to have lots of character. There will be a bit
more depth than lighter lowlands, a roundness to it and
hopefully quite a bit of fruitiness. I’d like to have a lot
of sherry wood content. Many people like that and it’ll
help give it depth. Will there be peat – in my opinion
yes, there will be a bit of peat, but it might not be there
all the time. We might have two streams of contrasting
whiskies, in fact.

How much whisky will the distillery make?

Initially 30,000 litres of alcohol per year, which to be
honest is tiny – an absolute drop in the ocean!

What about branding, image, names?

We don’t have a name yet. If anybody wants to come
up with names please give us a shout! I’m leaning
towards Saxa Vord for the distillery, because, well, that’s
where it is, but the branding of the actual product –
that would be different. It could be associated with
music. I don’t see why not. Music is so much associated
with Shetland – I was at this year’s folk festival and I
found it was stunning. It was amazing to see the young
kids and what they can do with their music here, so
yes, it would be good to have some kind of association
with music.

Obviously there will be a Viking connection in there
somewhere. There’s got to be because I think that’s
what brands Shetland around the world, to be honest.

When do you expect the distillery to be up and running?

If everything had gone to plan – we were hoping to
buy a second hand distillery, mash tuns, stills and
all, a very small one – and we were up to speed with
planning permission, HMRC approvals and the like …
then we could have been up and running sometime
in April next year, 2014. However, it looks like we will
not get the second hand equipment from Sweden. We
have already started to investigate other options which
basically means installing new equipment.

We are obtaining quotes at the moment and this
will result in an inevitable delay to the project and
will make the capital cost higher. However we still
believe that the finances work and will be appealing to
investors and so we are all fully committed to it.

As we will now be installing new equipment then
the installation of a whisky distillery in Shetland is
provisionally delayed by up to two years, however
we are also looking at options that will speed up this
process.

We are trying to push ahead, and there are things
that help us are first, the size – because it’s small the
planning permissions are much less restrictive – and
second, we don’t have to construct a building – it’s
there already.

I have to say that we’ve had great co-operation
with the council and all the other organisations we’ve
had to deal with. They’ve all been great: SEPA, SNH,
the Scottish Agricultural Colleges and Environmental
Health – everybody is very much behind it I think.
Obviously we have various regulations to comply with,
but people are trying to be helpful, and not put barriers
in the way.

The last attempt at a distillery asked people locally to
invest in bonds which would possibly give them a
return, and at least a case of whisky …

No, there will be no bonds like that. Our business plan
is being ratified at the moment by our accountants
and once that’s done we will be looking for some
amount of investment – but that will be from the City,
larger financiers and the like. what we will do once
the kit is in place and we’re running is offer people the
chance to buy casks of whisky for investment or for
drinking the future, once the whisky is mature. I’ve
been in this business for 30 years, and I wouldn’t want
to do anything which would harm the project or my
reputation. I’ve heard too many bad stories.

You can’t sell what you’ve distilled as Scotch Whisky until
it’s matured in oak for three years. What will you do to
make money from the distillery during that initial three
years?

As I’ve said, we plan to sell casks and warehouse them
for the purchasers. And we’ll sell brand new spirit. I’m
thinking that could be called Spirit of Shetland. When
I was at Glenglassaugh we bottled six-month-old spirit
from red wine casks and 12-month from bourbon
casks. That provided – different colours and different
flavours. It was interesting and we might look at that.
I’m also investigating the possibility of putting in a
gin still as well, and running that in parallel. And that
would be gin actually made and bottled in Shetland,
with real Shetland provenance! Cheers!