I wish my thumb hadn't been so sore. I wish the weather hadn't been so cold. But on the 10th July, adjacent to the UK's Most Northerly House at Skaw, Unst, on one of the most beautiful beaches in the world, it was absolutely freezing and my thumb, recovering from being shut in the door of a Volvo XC90 (fully closed and locked) began to ache, spectacularly. 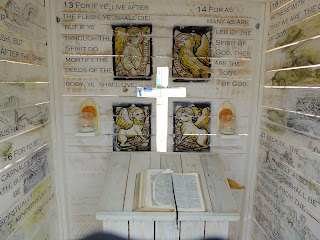 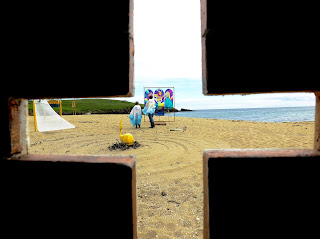 Which meant I rushed the last 10 or so of the (suggested) 45 minutes it takes to tour Vision Mechanics and Nordland Visual Theatre's installation 'Drift', and became increasingly irked by the somewhat florid Zetlandic musical pastiche hatched by the estimable Eddie McGuire to accompany the caped Drifter on his or her beach odyssey.  Songs were sung and a poised script read (in mostly convincing
Zetlandese) by Gerda Stevenson, all conveyed to me in digital purity via a kind of appropriate thumb drive. And headphones. 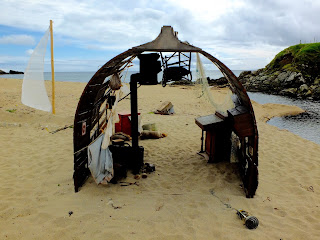 The compulsory cape didn't help. If it had been made of wool-lined Gore-texed oilskin it might have aided my concentration, but as it was, I felt like a bedraggled T in the Parker using last year's embarrassing waterproof. Still, if I was cold, think of the Vision Mechanics staff who are taking this show around Scotland (Burntisland and Nairn done, St Cyrus and Eigg to go). They're camping for the duration, in a classic canvas bell tent. Ah, but it has a cast-iron stove. That's very nearly cheating. 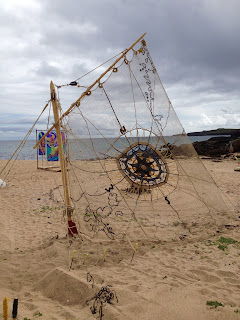 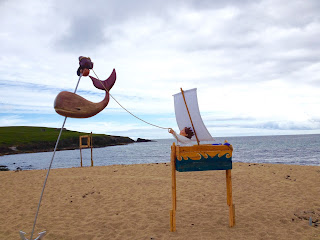 Every Shetlander and Soothmoother should know it: Betty Mouat, 61, sailing from Grutness to Lerwick to sell her knitting in January 1886. The crew of her boat are swept overboard, and Betty, alone and starving in storm after storm, is swept helplessly around the North Sea for a week, until the boat grounds at Lepsøy in Norway, with Betty safe, well and telling her tale for another 30 years. Drift delves beyond the surface narrative to examine what Betty's innermost thoughts may have been, and very haunting, yet uplifting it is. I particularly liked the meditation 'chapel' based on Romans Chapter Eight, Betty's favourite Bible verse: 'No condemnation'. 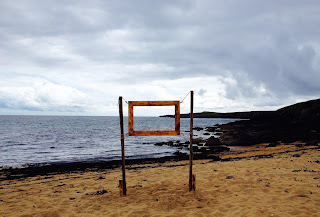 The drive to Skaw from Norwick is a piece of theatre in its own right, and Skaw itself is truly one of the world's wonders. If you can't get there (Drive to Aberdeen, 14 hour ferry to Shetland, hour's drive to Yell ferry, half hour across Yell, ferry to Unst, drive to top of world, descend to beach at end of world), then try to catch Drift in its other locations. You'll probably like the music more than I did.

But this is Scotland (and indeed Shetland, and in this case Unst) in July. Wrap up warm, and mind your fingers when shutting that car door.