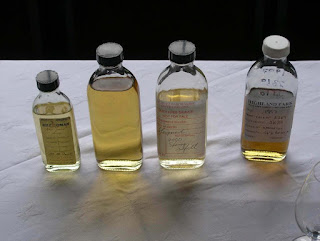 ....written in response to this article

(1) Injury to the consumer and to others. Motor function, hand-eye co-ordination, impaired vision, hearing and inability to assess distance and/or speed can all contribute. This is due to the high levels of alcohol found in whisky.

(2) Memory loss and brain damage. Alcohol’s effect on brain function is well-researched and anecdotally familiar to all users. Damage to the brain can be permanent and severe. Any so-called improvement in memory function due to ‘antioxidants’ is insignificant in comparison. This is due to the high levels of alcohol found in whisky.

(3) Cancer. Sustained consumption irritates mouth, gullet, oesophagus, gut and indeed nasal passages should you become a profligate dram-sniffer, and has been proven to provoke the growth of malignant cells, particularly combined with highly toxic burnt or burning carboniferous compounds, for example tobacco smoke. This is due to the high levels of alcohol found in whisky.

(4) Emotional disturbance and consequent violent altercation, often resulting in injury (see (3) above and/or court appearances and/or imprisonment. See ‘effect on brain function’ in (2) above. This is due to the high levels of alcohol found in whisky.

(5) Loss of creative abilities in the fields of music, art, literature etc. This may be accompanied by an initial euphoria that one’s creativity has actually been improved, but the toxic physical effects attested to above and the drink’s essentially deceptive qualities, tend to breed overconfidence in one’s abilities. In the medium to long term this always leads to an objective diminution of skill and insight, due to the high levels of alcohol found in whisky.

(6) Depression. Whisky is a  noted depressive. This is due to the high levels of alcohol found in it. Alcohol, despite the initial sense of euphoric happiness it may imbue, is a depressive drug. Whisky, though, is thought to be particularly mood-lowering due to the presence of...

(7)... toxic compounds produced during the traditionally crude distillation process (congeners and phenols such as Furfural and Ortho-Cresol) and also during ageing in wood (lactones). Furfural is lethal in large quantities and also found in beer, as it is a product of malting barley. Ortho-Cresol is corrosive and poisonous, and is used as a disinfectant and solvent. It is most apparent in Islay single malts. These also contain high levels of alcohol.

(8) Diminution of intellectual ability/increase in dogmatism. Whisky (see (2) and (5) above has an effect on mental processes which combines an increased certainty of rectitude with a slowing of function and decrease in ability to argue effectively. Flexibility of thought is hardened and may cease altogether due to the high levels of alcohol. Also...

(9)...control over bias, bigotry, dislike and deep-seated hatreds, normally moderated by logic and manners, often disappears. This can result in, at the very least, social discomfort and sometimes assault, injury or even violent death depending on how much alcohol (and whisky contains high levels of it) has actually been consumed.

(10) Hangovers. A whisky’s taste and character essentially comes from variations in its impurities (see (7) above age, and the quality of the distillation process (not all distilleries are the same, are well run or operated with a punctilious attitude towards, err...cleanliness and precision). While the hangover or ‘morning after’ syndrome may simply be caused by the high levels of alcohol, the toxins in whisky can exacerbate the situation severely.

(11) Cost. An enthusiasm for single malt whisky may, simply because quality malts are expensive, restrict consumption on economic grounds or - and this is more common - lead to  over-expenditure and financial difficulties or even bankruptcy. This is not due to the high levels of alcohol but the greed and malevolent, grasping market manipulation of many companies who trade in the stuff.

(12) Ill-advised sexual and/or emotional attachment, coupled with short-and-long-term performance inadequacy. This is due largely to the high levels of alcohol contained in whisky.

Apart from that, it’s great. Slainte!

(Please note; there is no functional health difference between drinking whisky and whiskey (with an ‘e’). But spelling ability is also an historical problem related to high alcohol consumption.)

Share as you like on the non-commercial web. For other purposes: Copyright Tom Morton 2015. All rights reserved.
Posted by Tom Morton at 9:55 am