The new Beatcroft social on Mixcloud and Facebook, with playlist (and a brief note on foiling music identification algorithms) 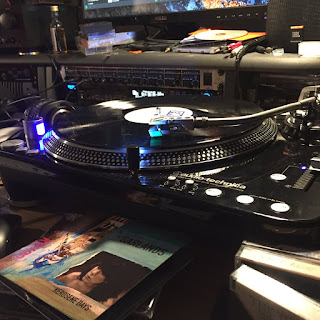 Here's the playlist and Mixcloud audio version of last night's (Saturday 12th November) Beatcroft Social, as broadcast on 60 North Radio. As I write, the Facebook Live feed is still up on my timeline as a recording with all the accompanying video, some glimpses of the aurora and my bargain priced red microfleece from excellent Cumbrian company EDZ.


A quick word regarding our continued efforts to stop the phantom Facebook algorithms from taking the live feed down (during and after broadcast) in the mistaken belief (if algorithms can believe anything) that we don't have the requisite licences. The Facebook machines are not geared up to detect relatively obscure music from Inverclyde, Edinburgh and Dundee. Nor are they good at dealing with old cassettes and vinyl. Leonard Cohen, bless him, tripped the wire this time but as I say, the feed is back for the moment.
.
Catch daytime views and much more music and video content from Shetland at 60north.com

And now the playlist:

The Garlands: Viva Tomorrow (from the album Kerosene Days)
David Heavenor: Jenny and the Cold Caller (from the album  I Wanted To See Him)
Bruce Cockburn: Mama Just Wants To Barrelhouse All Night Long (Vinyl; from Waiting for a Miracle)
Leonard Cohen: You Want It Darker
Transvision Vamp: The Only One (from the cassette Velveteen)
Andy White: Tower of Babel Time
Joe Cocker: Many Rivers to Cross (from the horribly scratched vinyl album Sheffield Steel)
Southern Tenant Folk Union: The War (from the album Join Forces)
Deacon Blue: Church (1986 cassette demo)
Dean Owens: Raining in Glasgow (single)
Bryan Ferry: A Hard Rain's a-Gonna Fall
The Legendary Hearts: Make a Home (single)
Cado Belle: Stone's Throw From Nowhere (vinyl; from the eponymous album )
Vivian Stanshall: Terry Keeps His Clips On
Sam Spiers: Three Cemetery Town (from the album Downdie)
Edwyn Collins: Hope and Despair (vinyl single, from the AED Edwyn CollinsTape Box)
The Big Dish: Prospect Street (Cassette. Live in Liverpool, 19th May 1985)
Mowgli and the Donuts: Out of Time (from the album Volume One - Terms and Conditions Donut Apply)
Luka Bloom: You Couldn't Have Come At a Better Time
Tom Russell: He Wasn't a Bad Kid When He Was Sober
Ry Cooder: Face to Face That I Shall Meet Him (vinyl; from the album Jazz)
Tired Pony: Dead American Writers
Leonard Cohen: The Darkness