This is the end, beautiful friend...aw, come on guys..Shetland, Series Four, the final episode. It was all a dream

Douglas Henshall issued a warning on Friday night that this final episode of Shetland, Series Four was going to be so disturbing you should "be around people you like." Possibly because you'd be so upset by the sheer dramatic potency of the experience, and therefore needing succour and comfort. Or perhaps so infuriated by the storyline's bonkersness you'd lash out in fury at anyone you didn't like, potentially providing some business for your local Perezes and Toshes...put that empty bottle of Shetland Reel gin down...slowly... 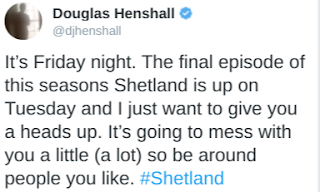 Anyway, I hope you found a suitable shoulder to weep on/an enemy to shout abuse at/a cat to kick/wall to headbutt.

Also on Twitter during the week, this interchange: Ian Rankin claims - claims - to know nothing of any beach barbecue or Rebus having a fling with twin sisters called Killiecrankie. A likely story! 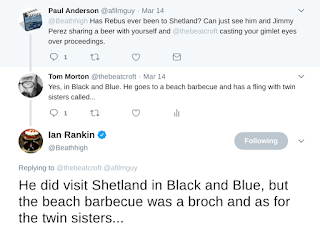 Note: Broch, not a kiln. Nor, for that matter, a tattie hoose or sheep fank, both of which are quite, quite different from a kiln. Unless you're making a TV crime show, of course.

Before plunging recklessly into the peat bog of confusion and misdirection which is the final episode of Shetland, Series Whatever It Is, a word: and that word is Lerwick, or Lerrick. Or as Minnie Mouatt from Unst told me, Lerook. Doogie (if he was here he would tell you) and other members of the cast have been told to say Lerrick, which, in the casual mouths of deep-dyed non-Shetland dialect speakers, (reverse-knappin' is the term, as opposed to knappin, which is when native Shetlanders speak precise English) sounds ingratiating and incorrect. The accents are a hilariously semi-Skoattissch mess, in truth, apart from the indefatigable and woefully under-used Steven Robertson, who Really Does Come From Here. Not that this will bother Douglas Henshall, according to top thriller scribe Christopher Brookmyre (SWEARINESS ALERT!)

Thanks for that Douglas. Always a pleasure. Right, here we go:

Chilling, says the continuity person, it's a chilling series finale. Don't know about you, but I am chilled. And cue the drone, the eye of God: It's the Volvo, giving it Scandic car all over the place. Jimmy's pea jacket meanders moodily towards the Wildlife Sanctuary (where are the animals?) and a hunted looking Donna Killick. And we're looking at the beach barbecue on 8mm (transferred digitally; film is always better. Go Analogue!) Alan's father? Gone by then, says Donna. 'Duncan and Lizzie seemed quite close, don't they?'
Dunc's in trouble!

'Who is Duncan, anyway?' Over to you, Tosh. Take a deep breath: 'He was DI Perez's late wife's first husband, the father of his step daughter.' Chinatown without the sordid bits! No wonder scary Glasgow eyebrows detective is looking shell shocked. And here's Jimmy at Duncan's house. Picture of the deadly scarf that strangled LIzzie Kilmarnock and...it's deffo Duncan's. We've seen the video.

'Any idea how it got wrapped around the neck of a dead girl?'
Dunno. Maybe the scarf is...haunted? Like...a magic scarf? Shetland knitwear has special powers, after all
'You're going to have to tell me about you and Lizzie Kilmuir.'
Perez is looking hungover, very unshaven and in need of some blood pressure tablets, or a drink. Or both.
'Cassie's Alan's half brother, isn't he?' Well, yeah. But naw. But....you wont't mind giving me a DNA, ya swab? Let it go, Jimmy, we love each other.
Naw. Ah cannae dae that Dunc. Geeza a swab ya bam. It's Chinatown! Nope, It's Taggart, baby, but with seagull noises.

And here's Thomas Malone, lurking at what is clearly  Loch Thom, just above Greenock,  with trees and a shotgun, giving it beer can destruction all over the place. Never mind, he'll be back in Shetland momentarily. Doubtless via Gourock and the Dunoon ferry.

Dunc gets swabbed. Eyebrow tec is upset at not being kept in the loop. Julie the Stern Fiscal says wait and see. We're at Lizzie's grave with Kate and her daughter. And then we're not.

Sandy breaks the news to the team:  It's Duncan's DNA on the scarf and he's Alan Killick's dad, and unless I get more to do in the  next series, I'm off. Possibly to Wick, or worse, maybe River City.

Well, holy genetics, Batman! It's Second Dad! Does Mark Bonnar want out that badly? Does Craiglang beckon for him too?
'He's just another suspect'. Aye, right. Let's head off to the awfy dear Fjogstad kit house with the balcony.
'Duncan Hunter, you are being detained because it clearly wasn't you.' Nice house. Good beard. Jimmy wants a beard like that. He's been trying to grow one for six weeks.

'This is Shetland so it's always personal.' Aw come on, no way is dad interviewing dad. I'm with eyebrow woman and every other real cop watching this. Anyway, to the interview, and Duncan  admits having a do in 1993 with Donna Killick (and getting her pregnant) but he didn't do the dirty with Lizzie. He gave her the scarf because she was cold. A real man would've given her a jacket. Yes, he sort of half-guessed that Alan was his son. Did Sally McColl know that Duncan was Alan's father? Dunc offered her a lift home after the folk festival, but she turned it down. 'Do you really think I murdered Lizzie and Sally? - it wisnae me!'
Eyebrow woman: 'Well, somebody did.'

Jimmy to Cassie: Look pet, it's like this: Alan's your brother, Duncan's his dad, Duncan's been arrested, I've arranged some psychiatric help. Oh, and he was with your now-deid mum when this was going on. Chinatown! But in a decent, Scottish sort of way. Nobody gets their nostrils slit here.

Molly Killick comes to see Malone, her phone set to record. This is really messed up, as we all think he's HER dad (she's 23 and still at the Anderson High School, as often happens)  and he's mainly wearing a towel. Thank God he's putting on a shirt. Why did you leave flowers at Lizzie's grave? Because she was my friend. Jings, she's trying to seduce him, clumsily. Entrapment. Will violence ensue? Find out in a minute.

Now we've got Duncan in jail. Jimmy: were you sleeping with Lizzie?
'Naw. I did not kill Lizzie. I did not kill Sally. And when I say that to you Jimmy I expect you to believe me. Because I love you. Sally knew I was Alan's dad - she had a go at me and said I should tell him. I was ashamed and I didn't want to Cassie to know. I swear on Cassie's life...I do not want to go to River City!' And, hell, that's enough for Jimmy.

A BIG CLUE! A hitherto unchecked picture from Sally McColl's pen drive that she got in Norway from a woman...oh never mind. Anyway Donna Killick is in the background of said picture, which was  taken on the Unst ferry in 1993. Easy to tell as they were still using sail and oars back then on the Bluemull Sound. It was Donna dunnit. Course it was.

Suzuki Jimny sighted! Hooray!  Kate's at Thomas Malone's where Molly is unharmed but upset. I wanted to make him confess, she confesses, confessionally. But he didn't.
'Boath of yeh get oot noo.' Oh, and another thing, says Kate, casually. They've arrested Duncan Hunter for Lizzie, just so you know. WE KNOW!

Donna Killick interview. The clue was in the name all along. Kill. Ick! Though it could have been Kill More, or Muir, obviously. Subtle. 'I didn't know what else to do! It was her or me!' Just to be clear are you saying...YES! YES YES! YES!

Malone's off wandering with his shotgun. Clearly he's going to want to kill Duncan! Nurse, the Atenolol!

So, it turns out that the photographs  proving whodunnit  went to (and were destroyed by) former copper Drew McColl ( who was having an affair with Donna Killer, remember?) He's a golfer! Very suspicious. Conclusive I'd say. Mashie! Niblick!

I know you buried evidence and framed Malone, says Jimmy. Donna Killick confessed, Drew, yoo durty ex-busy yoo. Put down the five-iron.
'She's trying to protect me. I killed her! It was me!'
'No, you didn't.'
'Och, Okay then. Enough. I need to shave and so do you. I loved her. I was doing us all a favour. Malone's beard needed hidden from the world. Oh, and by the way I killed Sally, even though she was my daughter. Because....I just didn't like her very much.'

Meanwhile, what is Malone listening to on those orange headphones as he patrols the Market Cross with his gun? I vote for Daniel O'Donnel or possibly The Great Sydney. Now he's in Duncan's house and it's looking like nae mair Cassie's other dad. Mark Bonnar must have got a better offer right enough. But there's going to be a lot of talking first, of course

Jimmy arrives. Thomas, Duncan's telling the truth. Thomas isn't convinced.  Don't do it Thomas! Cue standard face-off/talkdown/weeping/taking the gun off him scene. Sobbing. The beard is swimming. There, there. Jimmy has the gun and Duncan...he lives! Still ten minutes to go though. somebody's got to die, surely! Somebody we care about, or what was the point of that MISLEADING TWEET, Henshall? I'm guessing Sandy. Steven Robertson must be fed up with this.

'You know ,Thomas you've been very badly treated.' Tosh knows. Tosh cares. And we care. Arrest him for firearms offences, for goodness' sake.

Wait a minute! Thomas is having a neart attack. Has nobody checked his cholestorol? He's spilt his coffee. Drip, drip. His life is dripping away. Let me repeat that: His LIFE is DRIPPING away like the COFFEE. This is not going to look good. Police brutality! Paramedics, more coffee dripping. I can tell you that (1) The real Shetland NHS would have saved him, no question and (2) I'm not supposed to be giggling. But wait, birds are tweeting and his spirit is flying free in a drone over Lerwick like...a silent drone thing! It's like...his eyes have become a camera! Or a bird. Or a helicopter. Or an angel. A bearded angel...

But wait a minute:

So you're telling me that the entire fascism/deaf artist subplot and the Norwegian trip was all a red herring? Lars, Whitrit laddie, Matthias, the portrait of the dog, the whole Wes Anderson thing? Just so you could get a jaunt to Norway? After all, the crucial Sally McColl thumb drive was already in the cop shop.

And you THREW AWAY the was-Malone-Molly's-dad/was Kate really Lizzie theme. Cowardly. Or perhaps you realised 23 was slightly old to still be at school. Doh!

No pulleys in this episode. Shameful.

But wait, here's continuity woman: Shetland will return next year WITH A NEW SERIES!

May God have mercy on us all. Who will Duncan have turned out to be the father of next?

Thank you for bearing with me through all this. Your support is valued. We shall speak again in a year or so. Possibly.

Walk in the footsteps of Jimmy P:

WARNING: There is apparently A SOUNDTRACK ALBUM! It WAS Daniel O' Donnell! 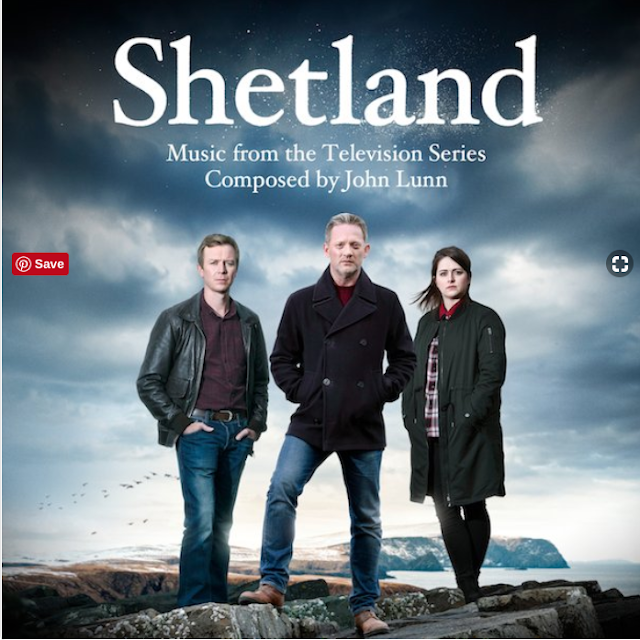