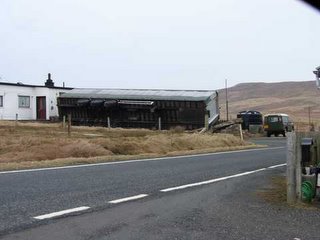 Big south westerly gales do this kind of thing in the Shetland Isles.
All the power went off in Hillswick in the early hours of Wednesday, thanks to winds gusting up to 11 (Nigel Tufnell would have loved it). Last time this happened, a window blew in at The Radiocroft, and almost next door, this trailer fell victim to the breeze on Wednesday. No injuries, thank God.
Yesterday marked the anniversary of the terrible tragedy in Uist, when five members of the same family were killed during a hurricane by wind-driven flooding.
Could the same thing happen in Shetland? Well, probably not. Shetland is nowhere near as low-lying as the Uists and Benbecula, there are few vulnerable causeways linking islands, and vulnerable coastal communities have been heavily protected by armouring, paid for by public money. That includes our own house, which is only a few metres from the sea and has flooded very badly in the past. In Lerwick, there are of course the Lodberries, houses built out into the sea and often incorporating boathouses. Most have always accomodated the ocean, more or less!
We have taken our own extensive anti-flooding measures since renovating our house, but perhaps the key difference between Shetland and the Western Isles is the financial muscle wielded by the local council (thank you, Big Oil), and the will to act on behalf of islanders. I simply cannot imagine anything like the Uist tragedy happening in Shetland. But if it had, I have absolutely no doubt that the council, for all its myriad sins, would have moved heaven and earth to ensure nothing like it ever happened again. And quickly too. It would appear that has not happened in the Western Isles.
The weather is gusty but bearable at the moment, though the forecast is for more gales at the weekend. As I'm booked on the boat to go south on Sunday night, this is not a pleasant prospect. To the Phenergan!
Posted by Tom Morton at 11:49 am

I hate to ask a daft question.....
but are there any trees on Shetland?

I know that some of the islands have no trees at all, and I`ve often wondered if there ever were any.

Is it possible to plant any to help,
forgive the expression, break wind, or would someone object to this?

While the desolation of the landscape is truly beautiful, it seems to be a little hazardous at times!!