Springsteen in a Citroen... 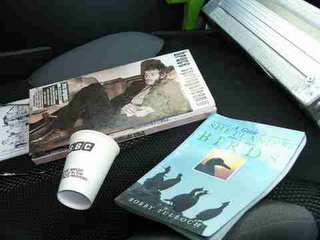 There was a time when...well, when Darkness on the Edge of Town and Tunnel of Love seemed to be the only things between me and oblivion. Born in the USA, too, was an extraordinary soundtrack to one of the most difficult periods of my life, though it was harder to love, in its big-time populism. Then there's Nebraska, it's murky, twilit vignettes of failure, fear and frustration out in the backroads of middle America.
I saw Springsteen and the E Street Band, at St James's Park in Newcastle, 20 years ago. It was overwhelmingly emotional, moving, joyous. No single artist has ever meant so much to me.
And yet... and yet...in my (and his) later years I've kind of lost the unswerving faith I once had in The Boss. So much earnest craft, so little inspiration. Devils and Dust, The Rising - worthy but overworked, so...dull. And the reunited E-Street Band - self-satisfied, indulgent, crass, even , at times...at least on the Live In Somewhere Outrageously Huge DVD I still have.
I bought Tracks, the 1998 four-CD collection of Springsteen outtakes, on a whim, on the rebound from Belle and Sebastian's whimsy and because it was seven quid on eBay. Good grief.
I drove out to Collafirth Hill, the roof of Shetland, to the sound of the second CD, mostly stuff from the Darkness/River/Born in the USA period. And it was shattering to realise how good these discarded songs were. Breathtaking. Bootleg classicslike Roulette, Living on the Edge of the World and Johnny Bye Bye. the original demo of Born in the USA -stark, dark. Stunning to appreciate how much work, how much editing and sifting went into the 'official' Springsteen releases. And so very emotional to be taken back to that time, when there was a spot out near Abram's Bridge....and a darkness on the edge of town.
I've since listened to the entire 66-song package. And while there's some mediocre stuff there, the quality is simply astounding. And to hear these songs for the first time is...rejuvenating. Especially in a week when I'm listening to music for pleasure, and not for business. It's great to rediscover the thrill and the power of it all.
Posted by Tom Morton at 5:47 pm

I read this post with a similar sentiment. As a near 40 something (38 to be exact!) Springsteen has been a big part of my life. (even persuading prof Hart at St.Andrews Uni to let me do a paper on the theology of bruce Springsteen!) I first saw them in Sheffield in 88 (my brother convinced me that it was not worth the money to go to St. James in 84!! - i still have not forgiven him!!!

I saw him again in the early 90's with the 'new band' and on the reunion tour which i thought was amazing! Tracks is an amazing collection as well, you are right all the sifting that he went through.

He still hits the high spots now and again, songs that still speak through the years. But the golden days of the Darkness era will not come by again. But his music is still a good life companion.

P.S. My win on your show came up at a school chaplains meeting the other day. Is it true you were a minister? Someone thought you had been. Looking forward to trying for the teapot!