The glory that was Tutti Frutti ('how come they're speakin' funny? It's for weans...') 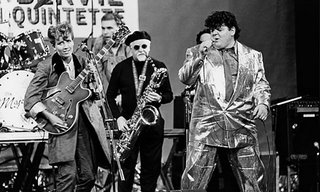 Having obtained the unobtainable, thanks to eBay, I have been completely gobsmacked on reacquainting myself with John Byrne's truly astonishing 1980s TV series Tutti Frutti. The fact that anyone who wants to see it (and hear the phenomenal, cracklingly funny dialogue) has to watch a fuzzy DVD copy of an off-air VHS is a disgrace, though I understand that the failure of producers at the time to obtain music clearance may mean it will never see the light of day again, officially at least.
It's by a long shot the best Scottish-made TV series ever, and for me just edges Spinal Tap as the funniest filmic depiction of on-the-road band life (that rehearsal with nappy-damped drums, the Farleys rusk/corkscrew/dummy teat interface...). Ensemble acting is great too: Coltrane is fantastic, Richard Wilson splendid but this is Emma Thompson's finest six hours and Ron Donachie comes close to stealing the whole thing. The recreations of 60s Ready Steady Go footage are exacting.It's inconceivable that something like this (shot on film, or at least until the money ran out in the later stages)could be produced today. It's, like, art, man. Though I recall producer Andy Park was incredibly patronising, not to say rude to me when I tried to interview him about it back in the day.
I was working for the Beeb at QM Drive when Tutti Frutti was being made, and I recall a memo being sent round the building demanding that "in future, no 35mm equipment is to be hired or film stock purchased for any purpose without express permission of senior management." It turned out the Tutti Frutti title sequence had been shot on 35 mil at truly extraordinary expense.
Still, it is a wonderful piece of work. How come people like John Byrne and Alasdair Gray get to be great writers AND painters? Plus one of them marries Tilda Swinton to boot. It's no' fair!
Posted by Tom Morton at 2:48 pm

Tom, does that mean you'll be making copies available?

The seller on Ebay was "removed" by Ebay soon after but I managed to get a Buy it Now in for the DVD before that happened. Mind you it hasn't arrived yet and the sedller hasn't responded to an email I sent them. So you may be the only person in captivity with a DVD of Tutti Frutti!

no it didnt and I'm still wondering whether to pursue my lost £7.00 through Paypal. But only a week later another ad on ebay appeared offering 20 copies - a guy here in Aberdeen, no less - so I popped round and got one at the weekend. haven't had time to look at it yet mind you - saving it for some evening the house is empty so I can put the sound right up.