Crystal Cathedral...or The Ministry of Truth? 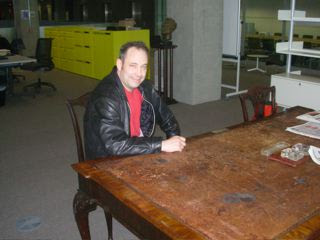 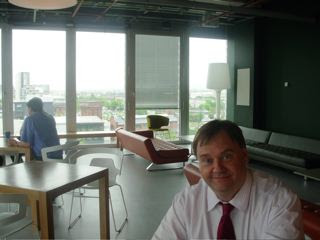 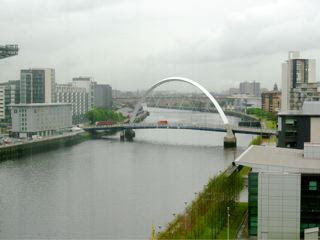 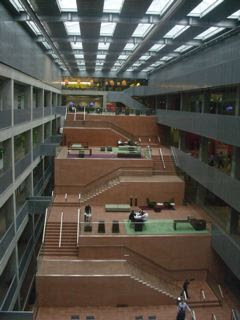 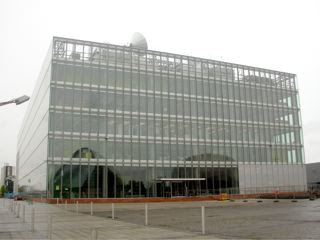 That's Lord Reith's desk I'm sitting at. Lord Reith, the man who made the BBC. Are the inkstains his responsibility, I wonder?

George Orwell allegedly based 1984's Ministry of Truth on the BBC's London HQ at Langham Place, where that desk was once located. Room 101 actually existed among what was (and is, only with capuccino machines) a Kafkaesque warren in which people get lost for years. Before eventually reappearing with an idea for a reality TV show.

Anyway, a tendency towards monolothic architecture among state broadcasters with a mission to manage a population is hardly surprising. The Reithian Beeb, and (in my own narrow experience) the South African Broadcasting Corporation both came up with forbidding buildings that shouted proudly about control. SABC's Jo'burg edifice was built to be scary, and is on a different scale from anythingin the UK. If you've seen Terry Gilliam's Brazil, you'll know what I mean.

Anyway, BBC Scotland is half-moved, and by July will be completely flitted, to its brand new HQ at Pacific Quay, in Govan. There is a Nuspeak element to the whole endeavour in its name: there never was a Pacific Quay; the site is actually Plantation Quay, and that area of the city is still known as Plantation, after the estate on which it was built. 'Plantation' is not a politically acceptable word, it seems.

This week my boss Jeff Zycinski (pictured; incidentally, Jeff is based in his beloved Inverness) showed me round what is an undeniably impressive building, something which, at the very least, is purpose-built and does not suffer from the horrendously cluttered, shambolically extended feel the 'old' HQ at Queen Margaret Drive has. PQ, as we must call it, has fantastic views, easy access by public transport, bicycle and car, and uses the latest technology. Its central atrium, with great red sandstone 'steps' rising gradually through its length, is breathtaking, if forbidding. And the giant banners hanging from its precipitous reception end are a mistake: Just too, too Soviet for comfort. There's already a couple of satirically Photoshopped pictures doing the rounds poking more than fun at them, which for the sake of my job I won't reproduce. And no, I didn't send them to the Sunday Herald, either. I'm not stupid.

My own impressions were of a surprising hush. The vastness of what is called 'the street', that immense open space that immediately shrinks the visitor to the size of a gnat, with its hard surfaces in stone and metal, makes you expect harsh, echoing assulats on the ears. But the acoustics are absolutely brilliant and should work well with public performances.

There's a central philosophy, though, which I disagree with. This building is designed to have an integrity with its equipment which truly makes it a machine for working in. But not living. The workstations and studios are part of its vision and structure, like a factory, and the humans who have to work them seem somewhat incidental: you may have an assigned desk, but we're in a hotdesking world, and you must not import plants, personal accoutrements, or pictures. There is (so far) no art. There are social areas for meetings and the canteen/bar is a magnificent piece of post-modern sixties 'modernism'. But there is nowhere to nest. Nowhere to hide or huddle. No corners and shadows where the mad, the bad, the dangerous and and brilliant can hatch plots and wallow in the fear and loathing which can give rise to great creativity. It's a clean, well-lighted place.

Now, here's my theory: I think the reason that the 'old' BBC buildings like Langham Place produced the greatest programmes in broadcasting history is because they were so huge and warren-like they offered nesting opportunities for minds that would not otherwise find sanctuary anywhere. OK, dissension and gossip are bred in such places. Cabals are formed, machiavellian plots hatched, hook operators can breed. But the very oppressiveness of those buildings was somehow ameliorated by the fact that within them, you could find your own place of escape.

There is something good about PQ's openness: you can simply wander in and see the likes of Jeff or the Controller, Kenny. They are accessible. The equipment is state of the art. But this is a digital building, and we are analogue people. I felt a bit like a seven-inch vinyl single in the Oxford Street branch of Game.

I expect that PQ will, gradually, be humanised. Humans, after all, have a tendency to do that. At the moment, though, PQ feels like an enormously impressive factory. In absolute contrast, for example, to the Scottish Parliament Building, which is organic, flowing, messy, soft, woody and entirely focussed on the humanity of its inhabitants.

And hey folks, that works a bloody treat, don't it?
Posted by Tom Morton at 11:25 am

Is that Lord Reith's chair too? It looks mighty uncomfortable, which may explain much.