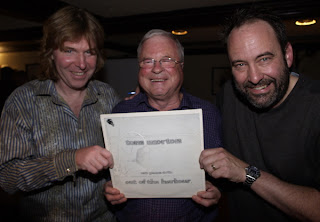 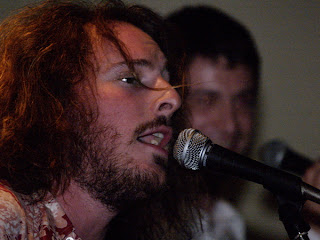 Here are a couple of pictures, by my old pal Stewart Cunningham, from last Friday's Music for Malawi night at the Hilton Grosvenor in Glasgow. The Billy Riordan Clinic on the shores of Lake Malawi is an intensely worthy cause that deserves all our support, and the night was organised by Doctors Sandy and Elaine Nelson, from Glasgow, who are spending six months as volunteers. Find out more here.

The singer with the beard is Kitterdy, aka Dave Nelson, who has a new CD coming out shortly that I wish to commend heartily.

The other picture is something of a curiosity: that's me on the right, and on the left is the exceedingly well-preserved Graeme Duffin, famed guitar player of, among others, Wet Wet Wet. Holding the LP is Murray Nelson, who, in the night's charity auction, was successful in bidding a whopping £100 for it. Out of the Harbour was recorded by Graeme and me in 1979, and was a surprise item (notably to me, as I was the auctioneer)unveiled from a plastic bag and described only as "a very rare and valuable record". Hmmm...
Other musicians on the record, fact fans, are Derek Clark on drums (where are you Derek?) the Rev David MacLachlan on bass (now not only a high profile Kirk minister but extremely well known as an anti-nuclear-weapons campaigner)and Norrie Craig on keyboards. Haven't heard from Norrie for ages. The album sleeve was designed by Graeme's brother Stuart and the record was made at the old Kirkland Park Hotel in Strathaven, which had a function suite that doubled as a 16-track studio. It was where Sydney Devine recorded most of his material, and was owned by a guy called Bill Garden (!). Produced and engineered by the redoubtable Andy ('those speakers are out of phase')Kidd, who later went on to become embroiled in the continuing saga of The Lowden Guitar Company/Avalon Guitars, which it is probably wise for me not to mention further.
Posted by Tom Morton at 11:30 am