Bitterly cold in Hillswick, and the end of newspapers, again 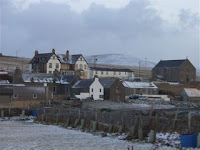 Not as much snow as expected this morning, and the predicted severe gales are just bitter and brutal breezes. However, much more extreme weather is expected later today and tomorrow. If I sound a little disappointed, it's just that I take a childlike delight in snow. It's always fun to see a St Bernard plunging through the drifts!
Meanwhile, news that the Johnston Press (owners of The Scotsman and loads of local newspapers) share price has fallen within 18 months from £6 to 6 pence. Much fulminating about the possible end of printed newspapers in the face of online competition.
Maybe. But as I write, they're queuing - yes queuing - at the Hillswick shop to buy this morning's Shetland Times. Local newspapers with an effective online strategy (and the Shetland Times pioneered that) seem pretty safe prospects to me, if not the licenses to print money they once were. Now, combine a local newspaper with a proper online presence AND a local radio station (or even a morning news programme online) and you'd be covering all the angles.
Meanwhile, it looks like the Scotsman will be sold, again. Hot bets are on either The Herald taking over (an historic blasphemy, surely!) or the family owned DC Thomson. As a practising freelance hack who has worked for everyone on the Scottish newspaper scene, I can say this: Thomsons are pros and pay promptly and better than most. And despite anything you may hear, in my experience they treat their journalists well. They're also financially secure. Unlike everybody else.
Posted by Tom Morton at 8:26 am