Farewell to the T25, and indeed all camper vans... 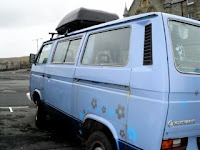 Right, that's it. No more bohemian hippy trail camper van fantasies. It's over.

Having said that, the venerable VW started instantly this morning and ran faultlessly on the 37-mile trip into Lerwick, through some fairly nasty conditions. But it was with a sense of relief that I handed over the keys to NorthLink's freight staff. All being well, the VW will be on the Hascosay freighter tonight and in Aberdeen tomorrow. There Kerry from Harrogate will, I hope, pick it up and make her way safely back to Yorkshire.

There is the little matter of the snow, but it's extreme climactic conditions that turn eBay collections into major adventures. It was at this time of year that I picked up a Citroen 2CV in Tonbridge, Kent, and drove it back to Shetland. The fact that it was freezing cold, the 2CV had holes in the roof and there was no functioning heater just made it more...memorable.

Speaking of Citroens, the less-than-a-year-old Citroen C4 has a broken heater. The fan (without which there IS no heater) only works in the full-blast position, which is unbearable for more than about a minute. Should be fixed tomorrow, but it's been incredibly annoying. Meanwhile, the K-reg Volvo Torslanda is in the garage for a new water pump and general fettling in advance of its MOT. Its heater still works fine, but then those old Torslandas had beefed-up internals to cope with Swedish winters. And probably the best seats in any car, ever.

Does this mean you are getting old:-) But what exactly is a Volvo Torslanda...? I'm not that car-oriented, but I live in Sweden and have never heard of this model, I guess it's some kind of nickname, but would love to know more!
cheers from Kati
(The snow has blown over this way now, by the way.)

'Torslanda' is, I think, the district in Gothenburg where the Volvo factory is. The name was added to various models in their 'winterised' form (no sunroof, no carpets, better heater)or so I understand. Mine is an old Volvo 240 estate.

Yup, that's right, my brother used to work there:-) I had no idea it was had been appended to the car name, always good to learn! Very practical cars, naturally I have one too:-) /Kati

The electric sun roof on my 17 year old Merc 190e stuck open last night ...in the snow...they just don't make them like they used to any more...192.000 miles you would think it would have lasted a bit longer without any trouble...

...but Jim, why on earth did you have the sunroof open in the first place?

Oh dearie me, as they used to say on The High Life...why's the veedub being offloaded then Tom?

Tom,i think we have heard "farewell to.." before...motorbikes wasn`t it?
So will watch this space...
just bought small caravan,not quite so hippy,but not without its woes I`m sure

It's gone, Bryan. Though I wonder if Kerry from Harrogate will actually make it to Aberdeen today to collect it. My wife has made me promise never to buy another one. And besides, I'm sick of high maintenance vehicles. Except for the Volvo...

Kerry made it back to Harrogate without any trouble at all!