Afloat again, but running out of puff 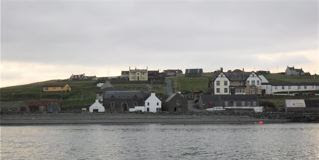 This is Hillswick, from the sea. I decided to try out the old Sevylor inflatable kayak, and fortunately chose a calm night. Only the camera escaped getting wet.

The big white building (with patches of new wood where it's being repaired) is the St Magnus Bay Hotel, now going like a train under the ownership of Andrea and Paul. Sadly, the Hillswick shop (lower right) is currently closed, though a community buyout is currently being attempted and will hopefully succeed. On the lower left is The Booth, or Da Bod, originally a Hanseatic trading booth, then a pub. It's now the Hillswick Wildlife Sanctuary.

There's a great picture to be taken from a bit further out, which appears to show Hillswick shadowed by the great red cliffs further out towards Eshaness. The village is essentially built on the stony beach between the Hillswick ness and the rest of the mainland.

I won't be going out in the inflatable again. I fear I'm a teeny bit too heavy for it...
Posted by Tom Morton at 8:37 pm