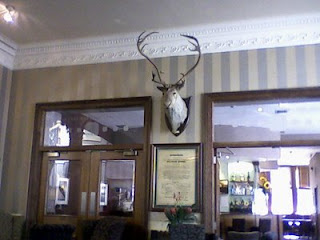 And so, after four hours on the train from Wick, I have reached Inverness. I have an hour here before the next train to Aberdeen, so I am now ensconced in an old haunt, the glorious foyer lounge of the Royal Highland (formerly Station) Hotel. Here you can hide behind giant plants, flop into comfortable couches and gaze at the sweeping staircase and old oil paintings, while a moulting stag's head gazes down at you. It has always been my favourite Inverness retreat. More so before its (quite careful) modernisation.

I remember being here after my operation at Raigmore for skin cancer; here for numerous coffees, drinks and nefarious plotting with producers now scattered to the four winds of broadcasting and various corners of the world; the special 'Highland resident rate' for accommodation, a hangover from the British Rail days. And long before that, long lunches with my colleagues in Highland hackdom when I was working with The Scotsman. And briefer, noisier ones with the bairns when they were even more disruptive than they are now. Only much smaller.

Anyway. The four hour trundle down from Wick represents a return to Victorian travel values in a very real sense. The Duke of Sutherland planned and partially built the line, and some of it, infamously, loops inland around his various hunting lodges. It was just as spectacularly scenic as I remember, if you like the alien, treeless vistas of the Flow Country, which I do.

Now for the two-and-a-half hour hop to Aberdeen. Well, perhaps 'hop' is the wrong word. Meanwhile, I appear to be the only person in this hotel...
Posted by Tom Morton at 4:18 pm