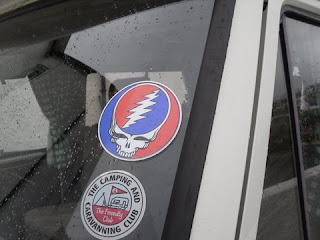 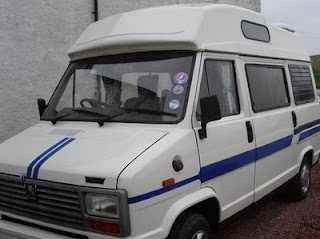 One hundred and one miles from Dufftown, the Grateful Dead stickers began to take hold...

Here's my newly-acquired Talbot Express Sheldon camper conversion, bought off eBay and collected over the weekend in my first ever two-nights-on-the-ferry-in-succession Lerwick-Aberdeen-Lerwick dash.

I know, I know. Not a VW. But for a VW, even a T25, in this kind of condition (rebuilt, resprayed, cared and cossetted) you'd be paying at least twice what I shelled out for this. No anthropomorphism. No names. Well, OK, the Pug, then, as it has that kind of look about it. And despite it being a Talbot, the last owner carefully sourced and applied a Peugeot badge to the front. It being, he says a Talbot-Peugeot.

We're planning a wee trip to Uists in August, and some gadding about Shetland before that. As for those Grateful Dead stickers....they add a certain sort of Electric Kool Aid Acid Test vibe, don't they? Comes of listening to American Beauty last night.
Posted by Tom Morton at 8:38 am