These are Morton Through Midnight badges, but they are UNOFFICIAL, and COMPLETELY UNRELATED to the almost quite good radio programme hosted by yours truly on BBC Radio Scotland (10.00pm-1.00am, Friday through Sunday). 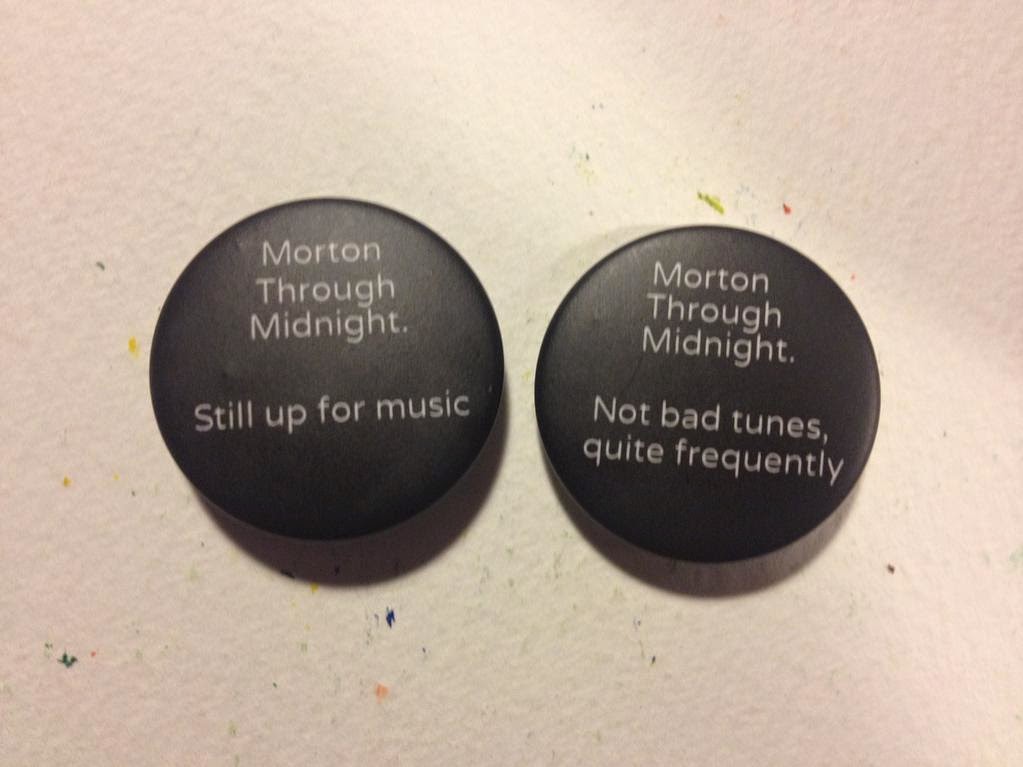 And so is this little quiz. For reasons related to BBC rules and regulations, I'm doing all this myself for a bit of a laugh. Neither the BBC nor Demus Productions, who make Morton Through Midnight, have anything to do with it, OK?

So. I have 20 pairs of badges (paid for them myself) and will send one pair to each person who successfully attains 50 per cent or more. That's 26 points AT LEAST! Please use the comments facility on the blog to provide your answers, or message me through Facebook if that's easier . Please do NOT email the show or use the Morton Through Midnight FB page!

Answers and winners (plus their scores!) will be posted here, once all the badges have gone. Or when we all get bored. If anyone enters...

(4) Give the three previous names of a famous Glasgow city centre  nightclub and venue, now part of an arts centre. (3 points)

(5) Which Scottish band is thought to have inspired the entire genre of symphonic keyboard-led prog rock during one London residency? Name the keyboard player? (2 points)

(7) John Lennon crashed his car while holidaying in the Highlands in 1969, injuring himself and his passengers. Name ALL the passengers, the hospital they were taken to and the make of car he was driving (5 points)

(8) "Old Clothes do not make a tortured artist" - sleevenote on which album? (1 Point)

(9) In April 1969, The Who performed the live version of their rock opera Tommy for the first time (possibly in Europe, certainly in Scotland) where? Please be specific about the geographical location and the name of the venue (2 points)

(11) What is Eric Clapton's main hobby? He has what named after him, and what is it called? (3 points)

(12) Hard rock band from Strathaven The Almighty used to be called what? (1 point)

(13) Sydney Devine recorded most of his early albums in a multi-purpose hotel/recording studio in Lanarkshire. Name the village (1 point)

(14) Headlined the Shetland Folk Festival in April 1988. Who was he? Who duetted with him at the Garrison Theatre show? Who was one of the (very hungover) support acts? (3 points)

(15) Jackson Browne, Glasgow Apollo December 1976. Who was the support act? Who played guitar with both Browne and the support? What specific, highly technical act did Browne carry out during the gig? (3 points)

(16) During his cameo in The Sopranos, what did David Lee Roth say he could once write off against tax? (1 point)

(17) He co-wrote one of Iggy Pop's most famous songs and played with Bowie. Who is he, and which Edinburgh prog rock band did he emerge from? (2 points)

(19) Which instrument does which legendary guitarist play on Cliff Richard's Time Drags By? (2 points)

(20) Name the venue and the town described by Melody Maker in 1972 as "The last bastion of Teddy Boy violence".  In a review of which band? Stiff package tour played there too in 1978. Full lineup and name of backing band, please! Also - how did they travel? (10 points, one for each correct answer).

Damn this is difficult!

...and we have a first winner of the badges, with 32 points! Well done Dougie McCann!

This is mostly (all) before my time

All this brain and memory scratching for a couple of badges? Just kidding.
Very tough.
Embarrassed I know so few of the answers unless, of course, I had sat up all night with Google as my bedtime buddy.
Great idea, nonetheless, Tom .