This is the fairly ramshackle (my fault!) Beatcroft Social from 15 October, the first to use vinyl and cassette as well as digital files. As I write, still available on Facebook Live with all the webcam action, but also, as below on Mixcloud, audio only. 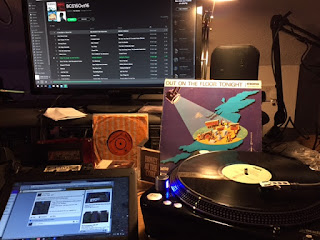 Worth saying a couple of things: I had never, in a quarter century of broadcasting, actually played a cassette or vinyl record out on air myself until last night. At the BBC there were either people to do such things or I used CDs, minidiscs or files.

And so, when I arrived at the Market Street 6.00pm last night, Iain was still installing the Audio-Technica turntable 60N had just acquired (indeed, he was wiring up the cartridge). There was a great deal of level-sorting to work out, too as everything was either too loud or too quiet.

I had spent the morning sorting out cue points for the cassettes (despite its legendary quality and reliability, the Sony Walkman Pro we were using is a fairly (very!) primitive device). But I just hadn't thought through the vinyl. OF COURSE we needed to be able to cue up the beginning of each track. OF COURSE we therefore needed to what's called pre-fade the signal from the turntable (hear it eithout broadcasting it). And could we manage that? Nope, despite strenuous efforts and the technological fact that it should have worked. So the start of records was guesswork. Hence the Oxbow Lake Band 33 rpm single starting at 45...among other things.

Anyway, steep learning curve and all that. One thing for other DJs and radio stations using Facebook Live: They're using an algorithm to detect 'unlicensed' music and will take the stream down if it finds something it doesn't like. Last night said algorithm claimed we played a version of Tainted Love by a band I'd never heard of without permission (we didn't: scratchy vinyl Gloria Jones). As I say every week on Facebook, and have told them directly, we have gone out of our way to obtain EVERY semi-relevant licence for net 'broadcasting' we could find, most of which are, of course, bought from organisations still living in the very early 20th Century, and who probably use goose quill pens and pigeon post. Fortunately, you can resist and simply tell them you DO have permission and stick the stream back up. Which is what I do every week.

I'm assuming that the BBC, indie broadcasters and everyone in broadcasting are trying to negotiate deals with the Zuckerbergians even as we speak. But FB will have to get the licensing thing sorted out, a la Mixcloud. FB Live is, potentially, a true killer app, in that it could kill aspects of YouTube, all of Periscope and a lot of traditional radio. Or, it could reinforce and benefit at least one of those. Guess which?
Posted by Tom Morton at 1:32 pm