A trip to the 2017 Aberdeen Jazz Festival

I always quote the Bonzos: Their track Jazz (Delicious Hot, Disgusting Cold) is a dada-esque parody of the Bonzo Dog Doo-Dah Band’s trad roots, found in all its 32 bars of cacophonous (they all played instruments they’d never picked up before) glory on the album Gorilla.

It kind of sums up my thoughts on some elements of jazz, though frankly the word ‘jazz’ is like the word ‘music’ -  it covers a multitude of sins and blessings. But it also could, I pondered as I wandered through the rain towards His Majesty’s Theatre in Aberdeen, cover the idea of a jazz festival in Aberdeen. In March.

And I had worries, too about the Curtis Stigers/Ryan Quigley Big Band gig I was heading towards, notably what my plus-one, - my 22-year old indie hipster daughter - would make of an evening comprising mostly songs made famous by Sinatra, entitled One More For The Road.

This was the first time the Aberdeen Jazz Festival, organised by Edinburgh-based Jazz Scotland, had attempted to fill the cavernous but lovely  HMT, and it was busy. Those who had come remembering Stigers’ brief worldwide, mullet-wielding  fame in the early 90s with the likes of I Wonder Why and You’re All That Matters to Me were not disappointed - he performed both, beautifully - but the rest of the gig was a warm, self-effacing, and very entertaining romp through Sinatra’s greatest hits, plus a scattering of Stigers’ own takes on the genre.

The Quigley band was exemplary throughout, playing with fire, passion, all the technical chops you’d expect and great good humour. And my daughter - who’s a classically-trained and occasionally orchestral musician, after all - loved it. These songs, beautifully played and performed, are history-proven, time-tested, and among the best ever written.

Stigers, suited and booted, looks like a scrawny, desiccated, older George Clooney and mixed happily with the audience during the interval. He’s a very good saxophonist, too, and it’s worth delving into the nooks and crannies of this eclectic talent’s output. His work on the soundtrack to TV series Sons of Anarchy is astonishingly powerful, notably his version of Son House’s blues gospel classic John the Revelator. His voice is a flexible instrument, and his jazz credentials are impeccable, going back to his beginnings. I’d buy his new album, which represents this show’s content but was recorded with the Danish Radio Big Band.

So, a triumph, and I could have gone on to the informal club at the centre of the festival, Aberdeen’s legendary Blue Lamp and enjoyed, no doubt, some more interpretations of the classics, this time Colin Steele tackling Miles Davis. But having been up since 5.00am, it was time to crash back at the Skene House Apartments in Rosemount, my home for the weekend. And very nice too. Good breakfasts, great staff, and just down the road is the wonderful Breadmaker café and the excellent Maidin Vinyl record shop. That’s what I call a location!

Next day I was engaged with things culinary and liquid, of which more elsewhere, and the evening took me to the Blue Lamp, which is a really fantastic venue, candlelit tonight and giving a very convincing impression that it’s really located somewhere in Brooklyn or just across 110th Street. It’s also completely packed for the Swiss band Trio Vein, with special guest the American saxophone legend Rick Margitza. This is contemporary, ‘modern’ jazz by piano-and-drums brothers Michael and Florian Arbenz, and bassist Thomas Lahns. Rick Margitza interracts as if he’s been playing with them forever, and while this is demanding, intellectual, occasionally abstract music it also has a warmth which makes it playful and without intimidation.

I skip off before Scottish full-on jazz-funk party outfit Fat Suit, who I know are very good indeed. Back to Skene House and a documentary on BBC4 about country music. This is what age has brought me to.

Sunday is the day the festival takes to Aberdeen’s streets, with all the risks that involves. The weather, however, mostly behaves, and a selection of visiting and local acts are able to play at various open-air locations and indoor venues throughout the city centre, all for free.

This is where the festival really, for me comes alive, with clearly enthused and occasionally joyous volunteers guiding us hither and indeed thither to investigate some unexpected musical delights. The Silver City Soul Revue down in the sub-Union Street depths of Aberdeen’s ancient Green are, for me, quite inspiring - whip smart covers of all the soul greats, and some funk treasures including Wild Cherry’s Play That Funky Music, White Boy sounding swaggeringly convincing. Up to the entrance to Marks and Spencers, where the wide-ranging nature of the festival is displayed through a local blues rock band’s effective channeling of Zeppelin and Purple.

And then, as a spattering of rain comes in from the sea, it’s off to the long-standing Belmont Street bar Drummonds for shelter, mineral water and what gradually emerges from the long, tunnel-like venue as a one-man blues band. A diminutive figure plays electric guitar and harmonica, hidden behind a gigantic bass drum. It’s great, and gradually I realise I’m listening to and watching a Scottish musical legend, the great Mike Whelans. Last seen by me in the Thule Bar in Lerwick 30 years ago, at the end of a Shetland Folk Festival, singing La Bandiera Rossa with Tich Frier and the late Davey Steele. 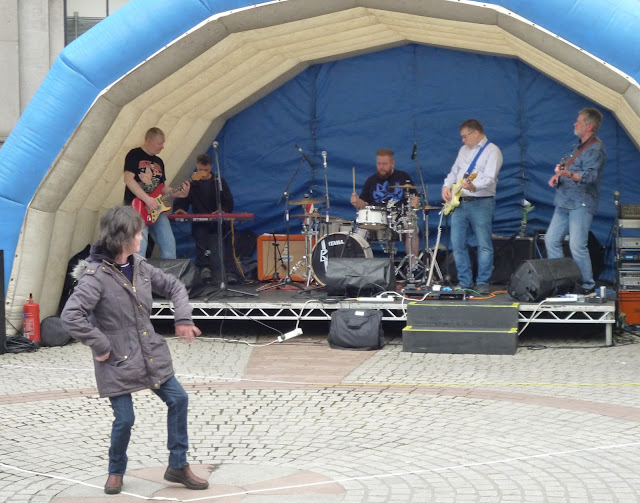 Time is running away with me, but as I’ve spent some 20 years passing the band stand on top of the Trinity shopping centre without ever seeing a band on it, now is an opportunity to see the edifice functioning as it was designed.  And Dope Sick Fly, a highly-rated Glasgow band who combine rock, funk, soul, jazz and hip-hop brilliantly, absolutely own the stage and the Astroturf in front of it, even though it’s getting cold and their Alabama-born singer Ant Thomaz is huddled in a very odd (but warm-looking) cardigan.

Truly, I only saw and heard a fraction of what was on offer at the festival. But what’s really appealing about the event is the range of styles on offer, the accessibility and sheer enthusiasm and friendliness of those involved. My experience? This jazz was hot. And delicious. Oh, and on my way to the airport, I stopped off at Maidin Vinyl and picked up some bargain LPs. Sinatra and 1920s ragtime. Scalding!