You wouldn't let it lye! Shetland returns. With the worst jukebox in the archipelago 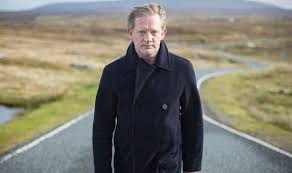 Here we go! (Warning: many spoilers coming up; but they shouldn't make any difference, really.)

Those are unsuitable clothes for a Shetland moor, if it is in fact not Ayrshire, where large lumps of Shetland are shot. But there are no trees, so it could well be the mythical state of Zetlandica. Or Narnia, post-apocalypse. Actually, here’s a fairly recent Land Rover Discovery, so it can’t be Shetland. We only allow Range Rover  Evoques here, maximum one year old.

Theme music, which sounds oddly like Emmerdale’s. It’s a sheep thing.
Right. Here’s Tosh, she’s having a psychotic episode. No, she’s just got her ear plugs in. Jimmy wants to know if she’s been out last night, when he looks as if he’s consumed about 20 pints of Jagermeister and a vat of sassermaet klatch. Face like a rhubarb crumble.  Or maybe it’s an allergic reaction to that next-the-skin gansie. C’mon, you were warned about that. Wear a vest.

We’re on Bananaman Beach, where there’s an arm, apparently uneaten by bonxies, otters (who are nothing like as cuddly as you may like to imagine) or the wandering packs of dogs Bananaman is famous for. Here’s Sandy. He can tell.

“It looks like it’s been…severed just below the elbow!” Yes. “Look at the fingers! No finger prints! They’ve been burnt aff!” Do you know what? I suspect lye. Sodium hydroxide. Don’t ask me why. Available from Shetland Janitorial, who also sell mugs and Henry Hoovers. Hey, Tosh what do you think?

“Any chance he’s still alive and bleeding out somewhere?”

Either this is a really dark joke or Tosh, you’re sacked. Or it’s a lye.

Right, here’s the Oldest Doctor In The World, pretending to be a forensic scientist. She knows her lye.  Someone tried to dissolve this limb. I told you about lye, didn’t I? Forearmed is forewarned. 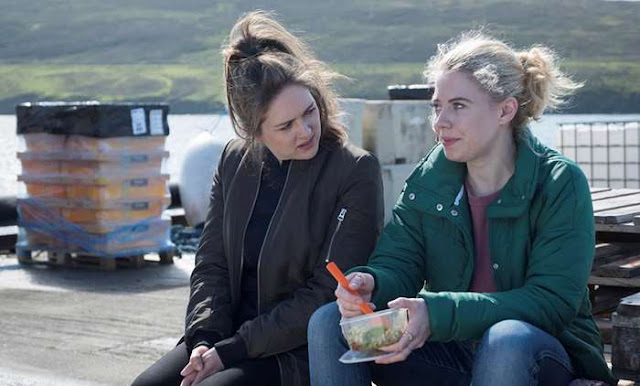 Worse is to come. Glutinous slicing of peat, and, tushker laid aside, one man and his dog find a head washed up on a different beach. The Old Fake Forensic Doctor opines:
“It looks like he sustained a head wound.” Indeed. More of a neck wound, I would say. Like an AMPUTATION OF THE REST OF HIS BODY.

Right, we’re back to the lye. Sandy has discovered that the paper mill uses it. Good grief, how would Shetland survive without that paper mill, the only outlet for the pulp from all of our millions of trees.

Now we’re off to see a scrap metal dealer. All TV scrap dealers are sinister, especially ones with boiler suits and shaven heads. He’s called Prentice.. Jimmy instantly identifies blue barrels with tiny labels as lye containers. Has Prentice been selling that lye? Is he an illegal lye dealer? Tosh has her usual insight, though. Trust Tosh. If he were to use his own lye “he’d be daft as a doorbrush”? A doorbrush? What is that? Shouldn’t it be a hairbrush? Or a hydroxide brush? Or a toothbrush with DNA? I think that's coming up...

To the bus station -  one unlike anything which really exists in Shetland -  where that ancient detective trick of the pencil shading showing up the impression of previous writing is deployed to devastating effect. Pipelines.  Blame the pipeline! (People smuggling alert!)

Here’s Calum Dunwoodie or Dinwuddie, captain of the Silver Darling (one of several clumsy literary allusions: Gabriel Garcia Marquez alert) He’s Glaswegian and suspicious. (You're not making money. YOU MUST BE A DRUG SMUGGLER!) But not as suspicious as the fish processing plant which is up to its ears in black whitefish, allegedly. One big problem. That’s a salmon processing line. Farmed salmon. Ain’t no quota for farmed salmon. Tosh wants to dig a bit deeper she says. She’s suspicious. It’s whaddockgate! I suspect a red herring, though. Always suspect the red herrings, mackerel, skate or ling. Wow, the Shetland Catch folk won't be liking this quota-busting/blackfish theme. It wasn't pipes, by the way, back in the real world. It was conveyor belts.

Daniel – the dismembered body is Daniel – comes from Nigeria, but his mum is from somewhere else with a Spar Shop, possibly Wick or Thurso. In a flash she’s in Shetland, and upset. Good acting. Even Jimmy seems convinced. He buys her what looks like a pint of white wine in the derelict Westings, where Charles Trenet’s  La Mer is playing on the juke box, and not Steve Earle or Lynyrd Skynyrd. This is probably the least realistic thing in the whole production.

OK, here's the scooby: black woman, nasty wee white (peely wally) Prentice (shaven head, pickup, Confederate flag on windscreen). I think he may be a racist, Father. Oh yes. Is that a white hood in the back seat? Or just a seat cover?

“All the single men in Shetland are single for a reason”. There’s a Tinder joke. Someone’s stealing Marjolein Robertson’s lines.

Let’s introduce some prostitutes. In caravans. They’re not from around here. ‘Awayday Girls’ in Shetland to turn tricks for the druggy, sex-obsessed oil refinery workers. They arrive on the ferry, sleep with druggy sex-obsessed oil refinery workers and then go away again. Of course they do. And Prentice is providing them with boxes of tinned food, or drugs, or lye. My money’s on lye. They need it to dissolve things like, I don’t know: Nail varnish, or bodies. Maybe hedgehogs. There’s a major hedgehog problem in Shetland. They’re a menace when they eat the magic mushrooms. You're liable to get spiked.

Tosh is going on about Pablo Escobar’s Facebook Page. She’s having a psychotic episode. TAKE YOUR EAR PLUGS OOT, HEN! Tosh gets all the witty/most stupid lines.

Back to the scrappies, where there’s blue barrels galore full of lye. I want those blue barrels. Cut the tops off and they’re great for planting stuff in. You know, illegal plants. Like...kale. Or comfrey. If it wisnae for the lye. Washing is essential. Do you dissolve humans in here? No, don’t get ahead of yourself Jimbo. Only animal carcases. Like horses. And unicorns.

Possible dodgy love interest for Jimmy arrives, wife of somebody who used to do a lot of adverts who’s suspiciously renovating a house. Meanwhile, that Mark Bonnar, the gay love interest from last season, is moving back in with Jimmy as his wife has left him for a lye dealer sooth. Typical. One Hundred Years of Solitude arrives, as this is a crime show with literary pretensions (no mention of The Shipping News, which lurks beneath every barrel of lye and box of black salmon). That and Craggy Island. Those blue barrels are very small, Jimmy, not far away.

A mysterious internet video of Daniel’s sister pleading for mercy, help, money and a selfie stick pops up conveniently on a cop computer, where Tosh has been on Tinder (only works on a phone, dear, keep up, swipe left). See her and that laptop? That’s a Mac’n’Tosh! (Sorry. At least I didn’t say ‘a big hand, please, for Inspector Perez…)

La Mer is playing in the background (copyright free music, budget saving move). Sandy knows his ProTools, and in a flash works out that there is only one juke box in Shetland it can possibly be on. The Worst Juke Box in the Known World. Next, Nana Mouskouri!

(Wait a minute. Was there a slow-motion car chase a few hours ago? Like Bullitt only on Tramadol and Stugeron, with Health and Safety rules ruling? Maybe. Who cares? Jimmy didn’t write off that Volvauxhall, which is the main thing. But why didn't the airbags go off? Cheapskate production values. Next you'll be saying half of this was shot in Ayrshire.)

POLIS RAID! To the Westings, which has clearly been HQ to a people trafficking operation, as there are sleeping bags and a message saying ‘Dear Inspector Perez, I am Daniel’s sister but I am no longer in residence.’ Which is just as well as there are more episodes, God help us.  Daniel’s mother has blood on her face. She shouldn’t have drunk that pint of white wine. It wasn’t even Prosecco. It was…it was…
LYE!