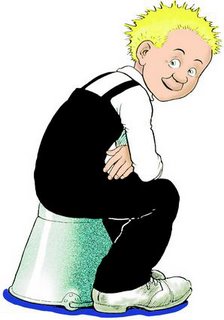 To Glenesk, one of the Angus Glens, one of the (no doubt many) surpassingly beautiful parts of Scotland I had never been.
Until preliminary discussions began on me taking over scriptwriting duties on The Broons and Oor Wullie, and a meeting was convened with me, artist Pete Davidson (who lives in Glenesk) and DC Thomson comics supremo Dave Donaldson. That was in the summer of 2004, and Dave and I swept impressively into Glenesk on our motorbikes. At least, Dave, on his new Triumph, did. I, aboard an old eBay-bought Kawasaki, was more cautious, lest the fairing fell off.
Fast forward 20 months or so and last night saw the three of us talking Oor Wullie around a roaring log fire, this time for the benefit of a BBC Scotland documentary. This will be a sequel to last Christmas's Broons film, and goes out to co-incide with Wullie's 70th anniversary on 8th March.
Among revelations last night were the following:
-Wullie has no last name, though his dad is called, ahem, Dave.
-In the early days of Oor Wullie, he had a baby brother, who vanished.
-No-one has ever written Oor Wullie scripts on a weekly basis. Until 20 months ago. No wonder I've been finding it tricky.
Many more Wulliefacts will emerge in the documentary. The most astonishing thing about last night for me, though, was that the attempt by Dave (loud accordion) and myself (guitar) to play 'Happy Birthday' as a Wullie cake was ceremonially cut, was scuppered by the fact that Happy Birthday is hugely expensive to use in any broadcast context, as it is copyright and can only be played by permission. Crivvens!
Posted by Tom Morton at 11:20 am

I've heard that Artist bloke plays a mean guitar himself

I always used to get a Broons annual for Christmas!