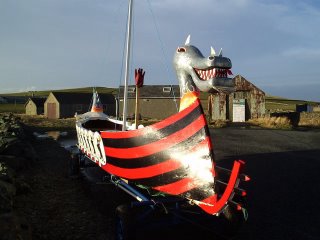 It's Up Helly Aa day in Northmavine, and the galley Hankavaar, constructed over the past two years (last year's festival was cancelled following a local tragedy)sits sparkling in the Hillswick sunshine even as I write.
Chief viking for the 'day' (which will last until around 8.00 am tomorrow!)is Ivor 'Hank' Hughson, and he will lead his band of merry men (and females - my daughter is a viking princess this year) around the local schools and other establishments during the day, until the procession and burning of the galley tonight.
This will be followed by dances in the Sullom, Hillswick and North Roe Halls until the wee sma' hours, along with skits performed by the squads of guizers who accompany the Jarl's vikings in the procession. These sketches promise everything from innocentjapery to scabrous social and political satire, and beyond. I have the programme here and performances will include: "Lowrie goes to da races and nips his pillie in da car door" which I don't think I'll translate from Shetlandic. "Running Bare" fills me with foreboding.
There are several Up Helly Aa fire festivals in Shetland each winter, signifying 'the lightening of the year' as winter begins to retreat. Lerwick is the biggest and most formal, but Northmavine is usually the most fun.

What a fabulous boat!
It seems such a shame to burn it..but I suppose the whole point is buiding a new one for the next festival.
I`ve still never managed to see the famous Viking Festival, one day I`ll finally get there.
I hear it`s such great fun!