Wanna buy a hotel? We don't have a local bar and we're suffering! 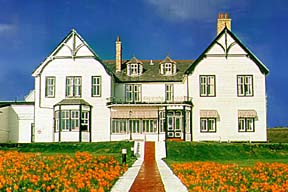 This is the St Magnus Hotel (formerly the St Magnus Bay Hotel) in Hillswick, the township in which we live and breathe and have our being.
It's been empty and unused (though sort of maintained and, we hope, heated) for some 18 months. The owners, a company from Canterbury called, wait for it, Canterbury Travel, have been peculiarly enigmatic about its plans for the place. On the one hand, the firm claims it's uneconomic to open it - at a time when Shetland's tourism industry is, if not, booming at least relatively healthy. On the other, all attempts to buy the place have been either ignored or met with obfuscation or disinterest.
Now, obviously, we need a bar. The whole Northmavine area needs a bar, and the St Magnus was, in recent years, the only one. That wasn't the only reason a community buy-out was mooted, but it's good enough for me. Let alone the fact that confused tourists are constantly seen peering in the windows. Good grief, this is easily the most picturesque part of Shetland - yes, we now have the excellent Eshaness Cafe, but Hillswick needs its hotel.
I mean, it's beautiful, isn't it? It's a Norwegian structure, built originally in Glasgow as part of the Norwegian exhibit at the 1901 Great Exhibition. It was dismantled afterwards, then floated on a barge north to Shetland, where it was re-erected at Hillswick, and became a luxury retreat for adventurous travellers. It offered all kinds of sporting activities. There was even, allegedly, a golf course. and some of the best sea trout fishing in the world (long gone, alas).
Adobe Photoshop makes it look a bit better than it actually is, but it's fixable. Go on, you fancy a new life in the northern isles, don't you? Canterbury might even put you in as resident manager - I hear they've been looking for someone. Or we can hope that our local Initiative At The Edge Group succeeds in its efforts to buy the place.Though weirdly, Canterbury refused the group permission to carry out a survey. Why? the place has to be a drain on resources?
Menwhile, it's 11 miles by foot or bike to the nearest bar. No driving obviously. This situation cannot be allowed to continue!
Posted by Tom Morton at 8:50 am