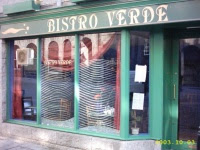 Phew! Safely in Glasgow, after last night's BBC Music Department (Popular Rock And Accordion Dept, Aberdeen HQ)party at Bistro Verde on the Green, one of my favourite Castle Greyskull eateries.
Truly fantastic food, though the chilli prawns almost blew the top of my head off. Alas, I had to behave in a fairly abstemious manner, as I was facing an early morning drive to The Dear (Mostly just expensive these days) Green Place in the van I've hired to transport some goods on Santa's behalf. Notably a drumkit.
Still I did allow myself one vodka shot to finish the night off in Siberia, one of Belmont Street's trendier howffs. People did look askance at my Primark suit, but hey, an Armani hoodie's pretty much like a North Eastern Farmers one, except more prone to staining when showered with sheep excrement. As seems to happen quite a lot in Belmont Street.
Phoning today to check how it all ended up, I discovered that the promised VIP access to something called Club Tropicana failed to materialise, as it was, well, shut. Still, the Youngsters of the music team were out partying until 5.00am, which you wouldn't have thought was even possible in Greyskull. Possibly they were in the Independent State of Torry. Where anything's possible. Or even probable.
I'm in the rapidly decaying BBC HQ at Queen Margaret Drive, where tonight the very last BBC Christmas party will take place before the move to Pacific Quay. I have fairly lurid memories of the old Film Unit parties back in the day, and wish to leave them intact, so will not be attending. I will however, be heading for The Halt Bar in Woodlands Road, there to rawk'n'roooaall with the excellent Ping Pong Banana Show, who are a band, in case you were wondering.
Tomorrow, some serious, high octane shopping, a visit to Ayr to see my dad, then on Sunday it's load up the surfboard and various accoutrements of student son Magnus, and head for the boat. The spectre of IKEA is also looming. Oh dear...
Posted by Tom Morton at 12:48 pm