Some nostalgically embarrassing memories of Radio Solway, back to the Travelodge, and Idlewild in Aberdeen

It was the Pictish Trail (aka Johnny Lynch) and his excellent blog about the King Creosote Bombshell tour that alerted me to something I should have noticed many years ago: that in all Travelodges, when you first enter your bathroom, one little sliver of soap is balanced atop two plastic glasses. Just like home! Sigh! 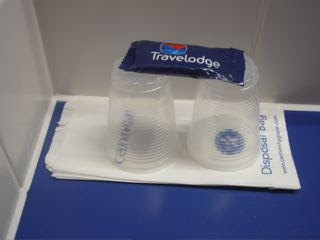 Meanwhile, here's a tantalising glimpse of a page from a 1989 magazine produced by the late lamented BBC Radio Solway, back in the days when BBC local radio included all kinds of Scottish locations. (And who knows? Maybe we're heading back in that direction, only with digital knobs on.) I found a big bundle of said publication in the self-operated studio the BBC still has in Stranraer, a real step back in time, and possessing a filing cabinet full of, well, memories. Those haircuts! Gary, those glasses! I think you may recognise some familiar faces in those blurred black and white pictures...on the other hand...oh, and there's more, and more embarrassing where those came from... 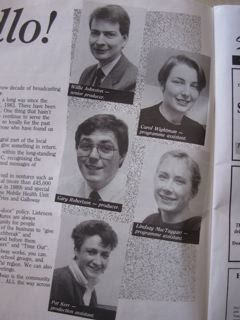 Finally, this was the scene in Aberdeen on Friday when Idlewild played an acoustic set for the show and for an assemblage of around 30 listeners. It was great. Catch it on BBC Radio Scotland's Listen Again player. 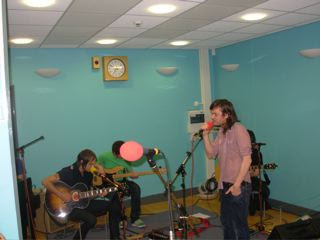 Ahh I wish I had known... love Idlewild. Went to their gig at the Music Hall in March and it was simply one of the best gigs I have ever been to. Even got it on DVD now.