On the beach in Aberdeen 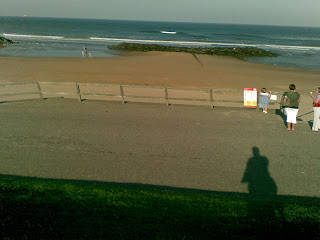 Heading home to Shetland on tonight's boat for less than a week, before having to go south again for the Belladrum festival. It's a dreich old day in Castle Greyskull, but yesterday and the day before were nice...and on a hot day, Aberdeen's beachfront really comes into its own.

Down to the King's Links for 50 balls on the golf range, a windswept walk along the (must be the longest in the UK) prom, check out the surfers/kayakers/oil supply boats/paragliders and then head for the coterie of cafes for seaside food at its most elemental: TC's restaurant, in the former Harry Ramsden's, is very good indeed - a splendid bit of haddock (they had monkfish and halibut too, with grilling an option for those not willing to be battered) with proper chips and mushy peas. A redundant salad, but then, aren't they all? Two pots of tea, bread and butter (which was inappropriately wholemeal) and then, ahem, a chocolate fudge sundae using some serious local Italianate ice cream.

I felt drugged with sugar and fat for about 15 minutes, then alarmingly ill, then very sleepy indeed. Which led to a disastrous 8.00pm to midnight snooze and the consequent inability to get back to sleep until 4.00am. It wasn't all wasted, though: I finished Don Winslow's The Dawn Patrol,

which is, sadly, nowhere near as good as his phenomenal The Winter of Frankie Machine, soon to be a Michael Mann movie with Robert De Niro, or its predecessor The Power of the Dog. Good on surfing, though. Which I'm now tempted to try.
Posted by Tom Morton at 10:57 am

looks like it could be a South Bay beach,
i will check out the book you mentioned and enjoyed.
i gave up surfing when i went head-first into a sandbar. after being taken by ambulance to the emergency room and having to call my girlfriend to pick me up at the hospital on her morning break at work, i never felt the confidence required to be on the board out in the ocean. but that was me. . . i say go for it and hang ten. incidentally the lifeguards who came to my rescue were wonderful but they did not look like Pam Anderson from Bay Watch.