Radiocroft is back on the air, and the funniest advert ever 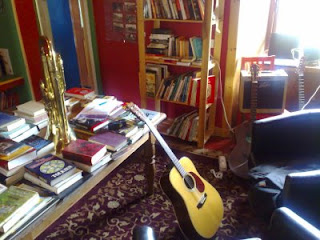 Back on the air at The Radiocroft, and the show today seemed to be fine (listen again at bbc.co.uk/iplayer). Maybe a couple of moments where the signal south became a bit 'metallic' (Engineer Ron's word) and two instances of 'return dropout'. The truth is that British Telecom HATE the now-obsolete ISDN (Integrated System Digital Network) lines, and want everyone to go to ADSL (broadband). BUT YOU CANNOT BROADCAST LIVE INTERACTIVE RADIO USING BROADBAND. At least not yet. ISDN is a one-to-one high quality connection. Broadband is about downloads, not uploads. The stuff you get cascading onto your computer is much faster and more copious than the stuff going back up the line. Which means me, talking, and that's, in this instance, the important bit. Oh, and the quality drops if more users come on line. 'Contention rates', this is called apparently. Skype etc is all very well, but won't wash on a hi-fi. Or any speaker bigger than, oh, an inch.

Eventually, broadband will be made to work for broadcast radio, but for the moment, I need ISDN. And for the moment, BT WILL provide it. At a price. And despite cutting off my Business Highway, leaving me unable to broadcast from The Radiocroft for two months, when we'd previously agreed a seamless tranfer to ISDN2E...hell's teeth, I know people with THREE ISDN lines installed for videoconferencing...enough. Rant over. A million thanks to Ernie the BT engineer for getting me back on air today.

Meanwhile, this commercial reduced me to utter hysteria, admittedly in the UK version, which is somehow funnier: