Violetta the Volksbus is heading for Connect! 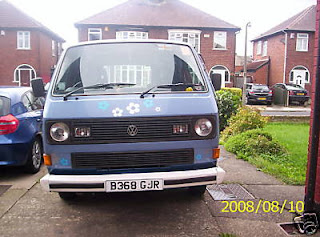 So...here she is! A PROPER camper! Last night, under conditions of great secrecy, I took a train from Glasgow to Edinburgh, another from Edinburgh to Newcastle, and then finally one from Newcastle to Darlington, there to meet a man called Don, custodian of Violetta the VW camper (technically, a Caravelle minibus converted to camper status).

It was an eBay adventure! Would Don be there? Would the 1985 bus now known as Violetta (a mere 270,000 miles vintage) make it back up the road to Glasgow? Through the night? A friend has described the A1 in its Northumberland stretch as 'a third world road' but that's pushing it. It is, however, pretty intimidating in the wee sma' hours when the petrol gauge (typical VW) merely wavers slightly no matter how much very expensive fuel is in the tank. Never has the petrol station at the Redford Barracks exit on the Edinburgh City Bypass loomed so reassuringly.

There is, as Dave, a fellow VW fan, says, something oddly addictive about these old rear-engined buses. That strange chirruping exhaust note, the way they weave about in the wind...anyway, Violetta made the 222 miles to Glasgow safely (the indicators gave up around Durham, but Don says 'the relay just needs a wee wiggle') and the great news is that Susan is (a) not too upset and (b) has found the missing camper van ticket for the Connect festival!

So, a fine feast at the Mussel Inn (salmon and prawns) a pint or two at the Horseshoe Bar (good to meet Frank, who not only likes the show but whose 21-year-old son likes the show) and then back to the west end...now...

...will Violetta start tomorrow?
Posted by Tom Morton at 9:38 pm