It's a faecal matter, baby: why I hate chickens and reluctantly like Monty Halls' Great Escape 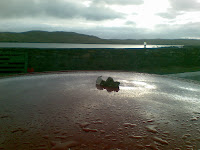 I am kind to our chickens. Or hens, as Monty Halls was sternly informed "we call them up here" during last night's Escape To River Cottage (North) Only With a Marine Commando And His Demented Dog on the telly. Alas, our hens do not repay that kindness. Failing to lay eggs and, despite being fed twice a day, shitting on top of the Citroen C4. Motoring critics in another life? The Citroen's OK but it is, alas, beginning to show signs of deterioration you wouldn't expect in a year-old car.

The Monty Halls (not the US quiz show host) series on BBC1 has changed its name at the last minute (Escape to Beachcomber Cottage was, ahem, just a little too similar to the Great Huge Faintly Etonian Whittingstall Person's Empire of Food. Though clearly Monty can barely cook). The idea is that Monty H becomes a crofter for a year (eight months, in fact) Various questions were begged by last night's episode: How the HELL did he do what thousands of others are constantly trying to in the Highlands, ie get hold of a ruined cottage in an idyllic spot and do it up? I know people who've been trying for decades to do just that. How the HELL did he get planning permission? How much did that RIB cost? (Anything between seven and 12 grand, I'd guess). And will that horrible dog be shot by one of his neighbours before the show ends? It wouldn't last five minutes in Shetland. How much slimy horrible bacon was cooked in last night's programme? Does he know how to make anything else? And how the HELL did they achieve such spectacularly lovely weather?

Having said all that, I really enjoyed it, and from what I can gather, the Applecross locals liked having Monty about for eight months (NOT the depths of winter, I note). He's a natural TV presence, is Mr Halls (though not the pooch). However, pieces to camera of the "it's great to be alone at last" variety just provoke cynical laughter these days: YEAH, APART FROM THE CAMERA CREW!

Great Sunday night downsizing-porn for the urban masses, without a doubt. But when I watched that Planwell roofing going on, all I could think was: get some insulation in. Some storage heaters. A Morso stove. You're going to need it...and in a couple of months, the midges and the ticks will eat you alive...

Meanwhile, back to the chickenshit. Oh, and the answer to my various questions (see above) is, without doubt, loads of money. It's made by Tigress, one of the giants in nature TV.

Except for the weather. Apparently that's something to do with the entire crew converting to Free Presbyterianism.
Posted by Tom Morton at 9:37 am

Any tips on the morso stove? I'm thinking of getting one for a new house.
Ta
Wendy