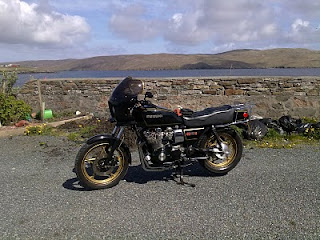 You know you're getting old when...you can't face the wind-in-teeth 12-mile pedal cycle run you used to do with James and without breaking sweat (nearly). So James went off for a lightning fast velocipedal sprint around the Ollaberry circuit, and I watched the Grand Prix. And then, as befits a man of my age and girth, I huffed and puffed my way aboard the Glorious Suzuki GS1000G and headed off to Brae to collect barbecue makings.

The old Suzi started, despite being left outside in all weathers, first time. It really is a wonderful machine, an American import dating back to 1979 but carefully restored. That inline air cooled four sounds immense, too, through an aftermarket exhaust.

However...later in the year I'll be riding at least a couple of thousand miles on a borrowed Moto Guzzi (see http://www.fairpley.com/the_barnard_challenge.html) and thoughts of a new motorcycle have been heavily provoked by the news (the last Labour Government did this! Take a bow, Alistair Darling!) that self employed workers can buy brand new motorbikes and claim the entire cost against tax. http://www.guardian.co.uk/money/2010/may/15/tax-deductable-motorbike-scooter-self-employed

A Harley Electroglide as my sole business transport? It might just work...
Posted by Tom Morton at 8:08 pm