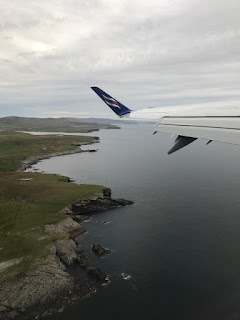 It is dull, Son of Adam, to drink without eating," said the Queen presently. "What would you like best to eat?"
"Turkish Delight, please, your Majesty," said Edmund.

The Queen let another drop fall from her bottle on to the snow, and instantly there appeared a round box, tied with green silk ribbon, which, when opened, turned out to contain several pounds of the best Turkish Delight. Each piece was sweet and light to the very centre and Edmund had never tasted anything more delicious. 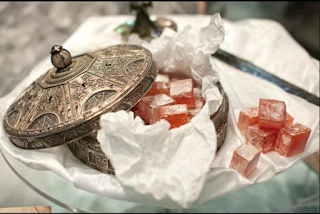 I hitched a ride on Jadis’s sled and gobbled up the Turkish Delight. Or to be precise, drank the (got to be Gordon’s) Gin and Fever Tree tonic (a sky-high £6.30, though I had my choice of ‘artisan’ gins and ‘craft’ beers for similar money).

And of course I wasn’t travelling on a sled hauled by bedazzled white reindeer through the snowy wastes of Narnia, but aboard a Flybe/Eastern Airways Embraer 170 jet from Sumburgh in the Zetlandic Archipelago to Glasgow in Greater Scotia. Which took 52 minutes and cost £134 return - though only because the atrocious Flyby website fooled me into paying for ‘my choice of seat’. That’s with my Shetland resident’s Air Discount Scheme reduction of around a third.

Five minutes before we whooshed into the - for once - clear and calm Shetlandic skies, a turboprop, 50-seater Saab 2000 used by Loganair had taken off, also bound for Glasgow. It would take marginally longer, cost pretty much the same, and was more than half empty with maybe 20 passengers. The rather lovely Embraer 170 (two cabin crew, brand new leather upholstery) can take 76, and had 14 customers aboard. As I walked across the tarmac, I chatted to a fellow jetsetter, who grumbled that he would personally have much rather gone with Loganair, but hadn’t been given a choice by his company.

“This is ridiculous,” he said. “Two half empty flights to the same place at the same time. I give Flybe six months,” he said. “And they’re dearer - because they charge for baggage.” 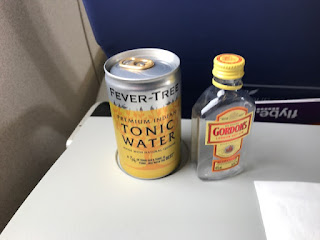 I muttered my support for his point of view, failing to point out that in fact the Embraer has big enough overhead lockers to accommodate proper, free, small-suitcase hand luggage, unlike Loganair’s compact and bijoux Saab 340s and their one bigger 2000. But the terrible truth is, I just wanted to go on a jet. In 39 years of travelling to and from Shetland, it had been nothing but propellers for me, from Viscounts and HS748 ‘Budgies’ through the horrendous Shorts 360 ‘Flying Skips’ and the made-in-Scotland Jetstreams. Plus the occasional Fokker Friendship and even a Twin Otter or two.

So I booked Flybe, not Loganair. The two airlines (Flybe backed by the muscle of Eastern) have been competing on the Scottish island routes since 1 September, after Loganair, who for a decade operated the services under the Flybe flag, decided they would take the job on themselves. Provoking Flybe to go into full commercial air war mode and provide alternative services, in Shetland’s case by using the aforementioned luxury jet (just one, which has to buzz about from Sumburgh to the various Scottish airports in a frenzy of fumes.  Three Aberdeen flights and one each to Edinburgh and Glasgow). Prices fell and were duly matched, almost pound for pound. Advertising campaigns were launched, including what I’d guess is the biggest-value single advert in the history of  The Shetland Times (a full four-page Flybe wraparound). There was a starry-eyed sensation among some Shetlanders that they had never had it so good, and among others that we were entering a mad race to monopoly which could see Loganair forced out of business.

Edmund tried to remember that it is rude to speak with one's mouth full, but he soon forgot about this and thought only of trying to shovel down as much Turkish Delight as he could, and the more he ate the more he wanted to eat, and he never asked himself why the Queen should be so inquisitive.

My sympathies were with wee, tartan-clad, Scottish-owned Loganair. To quote Neil Riddell at The Shetland News - "Loganair employs 40 staff locally and also provides a host of services essential to maintaining island life, including newspaper and Royal Mail deliveries, transporting pharmaceutical and medical supplies and NHS patient travel." Though all of that would presumably transfer to the victor should the current air war end in oblivion for Loganair. Unlikely? Well, it’s worth looking at Eastern Airways' and Flybe's history in achieving monopoly in services to local communities at the other end of the UK. A company called Air SouthWest took Flybe to the Office of Fair Trading, alleging 'predatory' pricing on key routes to and from south-west England. Air SouthWest was eventually taken over by Eastern and closed. Plymouth Airport then had to shut too. There's a disturbing legal assessment of what Flybe did here: https://uk.practicallaw.thomsonreuters.com/2-504-5714?transitionType=Default&contextData=(sc.Default)&firstPage=true&bhcp=1

It would be daft to lionise Loganair, however. No-one really knows what led up to their decision to pull out of the Flybe franchise deal, and sheer greed may, as usual, have played a considerable part. Listen, they even gave me a free plastic luggage tag. And they have this 'code sharing' deal which means you can book a route straight through involving British Airways. The wee plaid Paisley buddies are putting a brave face on things for the moment, claiming a year-on-year rise in passenger numbers since the start of September. Flybe is more cautious, stating that it is ‘generally pleased’ with how things were going. You can read both sides of the ‘we’re winning’ story at The Shetland News, here: http://www.shetnews.co.uk/newsbites/15213-loganair-encouraged-by-rise-in-passenger-numbers . There have been problems in both camps with delays; The Embraer is not quite as wind-friendly as the venerable Saabs, and Loganair have long been cursed with ‘tech’ issues on what is an ageing fleet.

As for me, I have not, like Edmund in The Lion, the Witch and the Wardrobe, been seduced into the Flybe camp for ever. I do worry that their tactics represent monopoly-seeking capitalism, red in tooth and  claw, and are either purely gestural or a serious attempt to stretch Loganair’s finances until they snap.

But on the other hand, as we smoothly and almost silently skooshed through the skies towards Glasgow, as I sipped my G and T and the sun streamed into the almost-deserted cabin, I thought:

Do they serve Turkish Delight on board? I'll ask on the way back home.

At last the Turkish Delight was all finished and Edmund was looking very hard at the empty box and wishing that she would ask him whether he would like some more. Probably the Queen knew quite well what he was thinking, for she knew, though Edmund did not, that this was enchanted Turkish Delight and that anyone who had once tasted it would want more and more of it, and would even, if they were allowed, go on eating it till they killed themselves. But she did not offer him any more. 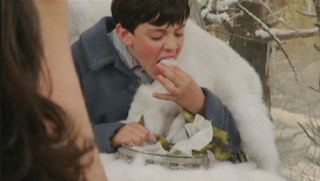 (All quotes in italics from The Lion, The Witch and the Wardrobe by CS Lewis.)

I'd be wary of flybe...and back the locals.
We backed the locals last time we visited NZ as well. Air NZ pulled out of the local airport at short notice in July 2015, Air Chathams is going strong. Even putting on a bigger (50 seater!) plane.