It's been quite a week - Shawn and Mark from Virginia, Neil from Crieff and Angela from Auchtermuchty came to visit - long-term friends of the various TM radio shows, and I thought it'd be good to get some song choices from them for the show. Actually, Mark and Shawn put together their own celebratory show for the visit which you can find on last week's posting here - every song themed to 'radio'.
Oh, and I can't resist pointing out to the powers that think they know about promotion that Angela, Mark and Shawn have all considered moving to Shetland - and only because they discovered the place through the radio shows and the Promote Shetland webcams.


Shawn, as you will hear, chose several songs, which is fine, and I think you'll enjoy this "visitors' selection", along with my own. I can't get Richard Thompson's 'Guns Are The Tongues' out of my head at the moment'. And the new David Rawlings album, Poor David's Almanack, is marvellous. 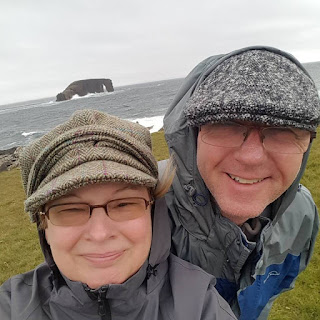 Just a quick word for two of the 'Fottomers' team who haven't been well recently - the founder of it all, Hugh Docherty, and Edward Johnson-Ott over in Indianapolis. Thinking about them. And in a week when most media attention has been on the awful flooding in Texas and now Louisiana, the last track - Stevie Ray Vaughan's Texas Flood - is also a call to remember the thousands who have died and the hundreds of thousands affected by terrible flooding in India, Bangladesh and Pakistan.