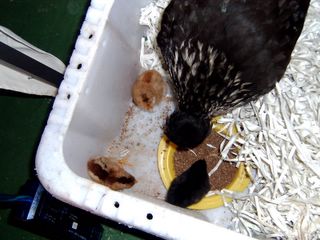 It's bizarre, but in the nature of blogging, to move from the macro to the micro, the painful implications of strike action and inaction to, well (sorry, I can't resist this) chickens coming home to roost. Only our nameless hen wasn't roosting, she was brooding over a clutch of eggs. Alas, they began hatching yesterday in the midst of foul, nasty, windy and cold weather, and most of the morning was spent in attempted resuscitation, having hauled hen, remaining eggs and swooning chicks into the kitchen.
Next, I was informed by assembled family that the most suitable place for three chicks (we lost one) and hen to recuperate was in my office, studio, Barn of Bannocks, call it what you will. Which is why today's TM Show will doubtless resonate the sound of, ahem, chirping and cheeping. But not, of course, any kind of chirpy cheep-cheep. Or, in the case of my wife's new car, a rather chirpy but very cheap Jeep. Of which more another time.

Off for the moment...

Thank goodness...no strike next week while the unions consider what to do next. Check out
http://www.bectu.org.uk/news/bbc/nb0261.html for all the details.
Posted by Tom Morton at 3:51 pm No comments:

NOTE: this personal posting is copyright Tom Morton, 2005. All rights reserved. No quoting or reproduction without express permission of the author.

The Aberdeen Journals strike of 1989-90 was a nasty, brutal, long dispute, and the results were all bad: diminished, compromised newspapers; bitter divisions between re-employed strikers and those who had worked throughout the dispute; a devastating effect, financially and morally, on the National Union of Journalists, and, following the final "settlement", anger from NUJ freelances at the attitude of the NUJ leadership towards them.
The Journals dispute, along of course with Wapping, put the final nail in the coffin of closed-shop union working in Scottish journalism. It caused upheaval among families as journalists were sacked, couldn't sustain a living freelancing, suffered health problems, moved home. No-one who experienced it would want to put themselves through anything similar again. And people tend to forget that originally, it was about money.
The current BBC industrial action bears few comparisons. Attitudes on both sides of the picket lines on Monday seemed generally good-tempered. Those who chose to work did so with heavy hearts. And it's not about cash. Though of course, everything is about money in the end.
I did my usual two hour show on Monday, and I certainly felt bad at seeing friends and colleagues out on strike. But I am no longer a member of the NUJ, and completely disagree that taking BBC Radio Scotland off the air is by any stretch of the imagination going to "save our BBC" as the placards had it. It can cause nothing but damage to listeners' and viewers' confidence in the station, at a time when it faces more, and increasing, competition than ever before. Severing the relationship between broadcaster and listener, even briefly, can cause permanent damage. And the BBC's creaky infrastructure needs rebuilding, no question.
The thought of next week's 48-hour action fills me with foreboding. No-one, from either side, has pressurised me or even contacted me on the subject. Perhaps music presenters (Moyles, Whiley, Wogan, Bruce, Wogan and Walker all broadcast) are seen as in some way beyond the political pale. Who knows?
I do know this. As a freelance contractor, I have absolutely no job security at the BBC. That's fair enough, I'm not looking for sympathy. I get well paid. It's my bed, I made it and I'll lie in it. if and when the time comes to leave, I hope I'll walk away with some dignity.
But having worked freelance for years, I know that things out in the cold, unforgiving reaches of independent broadcasting make even the proposed, lean'n'mean BBC look like a fat, warm and cuddly teddy bear. And I'm afraid that's the real media world out there, with its buy-out, short-term contracts, its cheapo indie productions where health and safety audits are a laughable luxury, its desperate teenage hacks on starvation wages.
Trying to stop the BBC heading down that road is highly laudable, but taking strike action to do it is simply not going to work. It's like striking against the weather. The problem with the Aberdeen Journals dispute was the political context it happened in: everything was changing; that kind of union action was never going to be allowed to succeed. The technological context of the current action at the BBC means it cannot succeed either.
But scars just as permanent could be left. I sincerely hope not.

Personal posting, copyright Tom Morton 2005. All rights reserved. No quoting or reproduction without express permission of the author.
Posted by Tom Morton at 12:28 pm 1 comment: 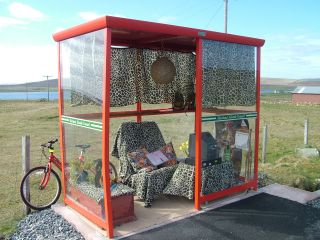 Unst is the most northerly island in Shetland, and indeed Britain. Two ferry rides away from Mainland, on which we live and breathe and have our being. Just north of Baltasound, the biggest township, you will find this fully-furnished bus shelter, maintained by local lad Bobby Macaulay, who has his own website at http://www.unstbusshelter.shetland.co.uk/
I was in Unst to make a BBC Radio Four programme about energy (there is a fantastic project underway there to extract hydrogen from water using wind energy) and enjoyed myself, as usual. It's a fascinating and beautiful island. Check out http://www.unst.shetland.co.uk/frame.html for more details.

The weather has turned really nasty all of a sudden, and for the past four days we’ve had hail, snow and all kinds of meteorological mayhem.
This has wreaked havoc on the lambing, which happens later in Shetland than anywhere else in the UK. Baby sheep have been dying all over the place this weekend, and there’s little anyone can do. Native Shetland sheep – officially a rare breed everywhere else but here – are hardy beasts, capable of surviving entire winters with little or no shelter. But new born lambs are obviously very vulnerable.
I think it was sixteen years ago, we were living in Cromarty on the Black Isle, and came back to Shetland for the month of May. It was almost insanely hot, day after day, week after week. Sunstroke became endemic. The islands ran short of sunscreen. It was bliss.
And now, here we are, shivering with the central heating turned up full. Apparently it’s global warming to blame. Of course! I should've known...
Posted by Tom Morton at 1:59 pm No comments: