God, a guitar, a grave. At Christmas. 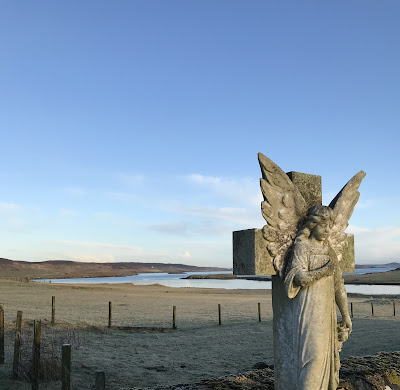 For the past three years, I've been conducting funeral services for folk who, for one reason or another, don't want any of the churches or their representatives involved in saying goodbye to their loved ones.

I'm not an official Humanist 'celebrant' ( I hate that word;  I'm not that crazy about 'Humanist' either) and I'm happy to include religious content. Or to provide a completely secular service. My aim is to meet the needs of those mourning their loved one, to provide whatever will help in the grieving process. I've written about how this all began elsewhere but so far, over I think nearly 80 funerals, there has been uncompromising  Marxism, Theravada Buddhism, some Star Wars, open-minded agnosticism, and Christianity in most of its manifestations. To a greater or lesser extent.

Anyway, in the run-up to Christmas two things happened. I conducted a graveside service on one of the most beautiful mornings of the Shetland winter, in one of the most lovely, remote cemeteries.  I had been asked to pray, in public. So I did. And then, I found myself playing guitar for the choir at the Hillswick Kirk's Watchnight service.

A few of you will know that I'm not exactly a stranger to either prayer or playing the guitar in church, though that period of my life ended in the 1980s. Some may find it very hard to, well, believe. An obsession with guitars has continued, however, and as I stood among the Advent candles, picking at the latest guitar in my collection (a cheap Vintage VE660, if anyone cares...and of course, you should) I found myself remembering the first time I ever played the guitar in public, at Bethany Hall in Troon, almost exactly 50 years ago.

As for public prayers, the deal in the Brethren (Christian, Gospel Halls, not necessarily Plymouth-related in west central Scotland) was that they should always be extemporary. And I was never that good at making things up as I went along...until I'd had a lot of practice.

These verses were both written on an iPhone in the early hours of the morning:

On hearing myself praying beside an open grave at Christmas

There’s nothing very odd
In thinking there might be a God
Or a first cause behind creation
it doesn’t take much imagination
Or mean you need even a smidgeon
Of badly organised religion
With a promise of eternal glories.
You can still enjoy the stories,
The language and the architecture.
You don’t have to accept conjecture
Or control. Or fear and dread
Of what might happen when you’re dead.
It’s possible to be a deist
Without the trouble being a theist
Always involves. There’s too much grief
Comes with the baggage of belief,
That endless hope of revelation
Which always ends up in frustration.
No voice of guidance from above
Can contradict the care, the love
The fragile heart, community
Humanity. Divinity.
So on this still and sunlit day
I stand beside a grave and pray
With others. Together we trace
The silent, healing truth of grace.

A Guitar for Christmas

A wall of sound:

Now I play, gently,
It Came Upon The Midnight Clear
Counting down to Christmas
With the Kirk choir
All acoustic, chords familiar
From half a century ago

Too many guitars to count
Since that first public strumming
Gibsons, Martins, Fenders
Costly as cars, encased, carried
From Texas to Bavaria
Even as far as Fife
Loud as war in churches
Drowned by conversation
In indifferent pubs and clubs

This steel-strung Chinese flat-top
Cheap as chips
Rings out like a bell.

For anyone interested, this is acrylic and pastel on a professional print made from a picture taken on an iPhone 7 through an old Brownie TLR Reflex! Then sandpapered.

Right, off to practise all those crazy chord changes on Hark The Herald Angels Sing while eating more of @marthamorton ’s mince pies. Not easy when you add Dailuaine to the mix...

Let’s get through this with as little damage as possible. 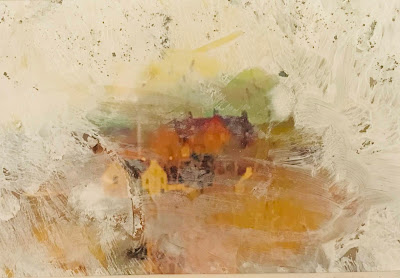 Posted by Tom Morton at 2:41 pm No comments:

From the (out of print) book Beatcrofting. 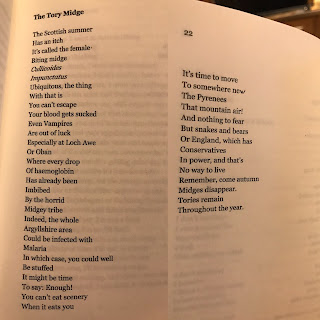