'Seven Waves' opens at St Clement's Church, Rodel, Harris, on Saturday 1 June, and will be there until September. The huge 'sails' painted by Dave Jackson and Erlend Brown to interpret George Mackay Brown's poem-cycle 'Tryst on Egilsay', about St Magnus, Earl Haakon and the murder of Magnus offer a breathtaking counterpoint to the stunning medieval architecture of this ancient Hebridean kirk.  All photographs by Lea Schuetz-Cohen.

A write-up on the project is in the latest Orkney News. 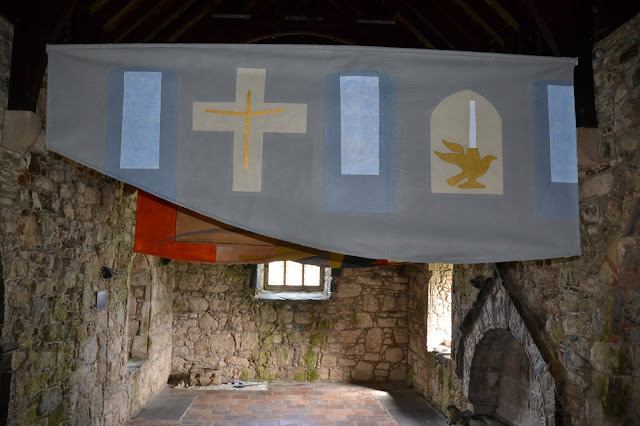 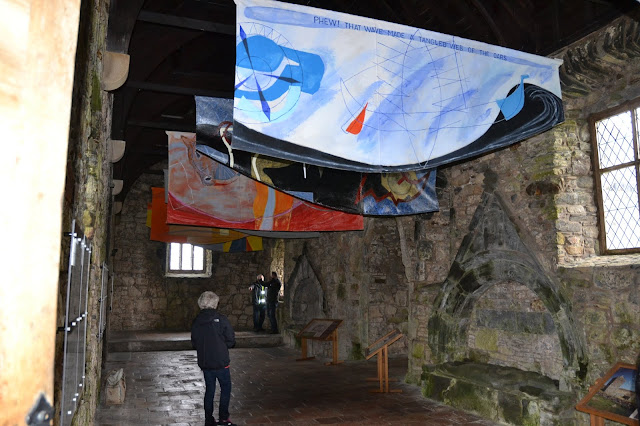 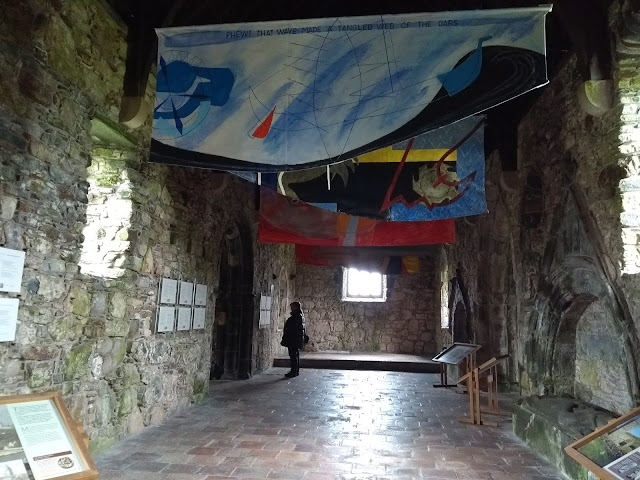 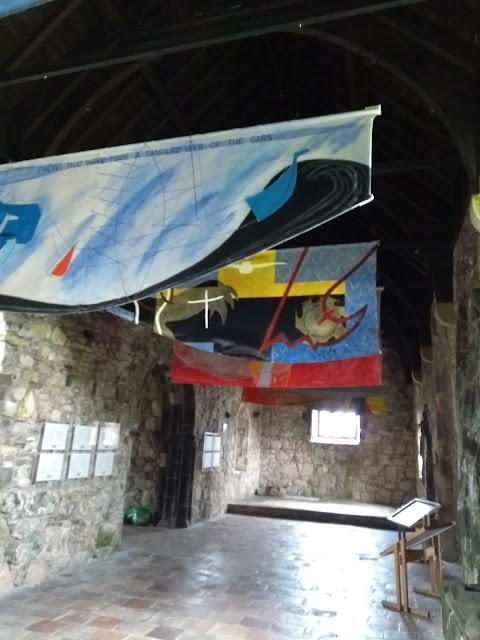 One of Europe’s greatest martyred peacemakers celebrated in Harris.

The links connecting Orkney, the Western Isles and Scandinavia will be celebrated this summer in a major contemporary art installation at St Clement’s Church in Rodel, Harris – managed by Historic Environment Scotland (HES) and recognised as the finest medieval building in the Hebrides.

Dave Jackson and Erlend Brown’s Seven Waves is an interpretation on a spectacular scale of George Mackay Brown’s cycle of poems ‘Tryst on Egilsay’. It’s the story of how, nine centuries ago, the devoutly Christian Earl Magnus Erlendsson, joint ruler of Orkney and Shetland with his cousin Earl Haakon, under Norwegian oversight, was betrayed and murdered on the island of Egilsay, ushering in an unprecedented era of peace and prosperity in Northern Europe.

Each poem, in English and translated for the first time into Gaelic by Ruairidh MacLean, is matched with a huge hanging canvas ‘wave’ suspended from the St Clement’s roof.

“Old Norse and Gaelic interacted a lot, especially in the Western isles. A very high proportion of the place names in the Western Isles are actually Norse.”

“Erlend and myself have interpreted George Mackay Brown’s beautiful and insightful poetry in a way which conveys both the haunting physical landscape of Egilsay and the huge political and metaphysical power of what happened there. St Magnus’s martyrdom and his search for peace in a viciously warlike world has resonated down the ages and is as powerful a symbol today as it ever was.”

Being able to mount the exhibition in St Clement’s was both a thrill and an immense privilege, Dave said

“This is a building of worldwide historical importance and enormous spiritual and emotional power. Erlend and I really hope our art and the poems about one of Europe’s greatest religious and political martyrs is both appropriate and inspiring in this context. It is a real privilege to be here and tremendously exciting.”

Erlend Brown said his uncle would have been happy with the project:

“George would have been pleased with the translation of his poems into Gaelic as his mother (born Mhairi Mackay) was a Gaelic speaker from Sutherland and she was a strong influences as he grew up.”

Claire Whitbread, Exhibitions Manager for HES, said the organisation was delighted to be involved in the project.

“It’s wonderful to have been able to bring this truly extraordinary art installation to Harris, and to be able to stage it in such a historic and atmospheric space has really created a special experience. We have worked closely with Dave and Erlend  and believe that Seven Waves complements St Clement’s architecture and spirit, as well as bringing together aspects of Gaelic, North isles and Norse culture in an effective and moving way.”

Seven Waves is open to the public from 1 June until 1 September. 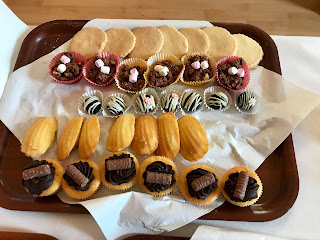 Martha arrived in a wet and misty Shetland at 9.00am off the NorthLink ferry Hrossey, and the islands were looking grim: grey, grumpy and not even slightly summery. It was no welcome for a returning Northmavinite on a week's break from medical work. And scant reward for a night on the uneasy North Sea.

But light and lusciousness were looming on this dreich Sunday. My daughter is 25, and so for a quarter of a century ( she began young) she has known the scintillating glories of Shetland Sunday Hall Teas. And Ollaberry is the king. Or queen. Or democratically elected community leader. 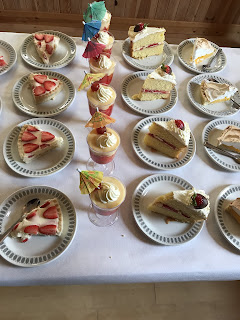 Some will say the teas on the West Side of the Shetland Mainland are as good. Others that the legendary island of Whalsay offers more and better baking. But I am not allowed to go to Whalsay (it's a long story) so I am unable to judge. BBC Radio Four made a documentary about Shetland Sunday Teas and did go to Whalsay. It certainly sounded good.

The truth is that all the Hall teas - where local folk, mostly women, get together to produce savouries, sandwiches, soups and homebakes in spectacular style and quantity, raising funds for the hall and local charities - are fantastic. My own local hall, Hillswick, is superb. It's just that Ollaberry, in my experience, has the edge. 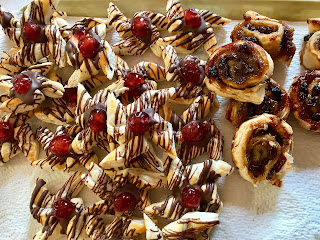 In the book my son James and I wrote about our love for Shetland and its way of celebrating through food, Ollaberry and its teas feature heavily (so do Aith and Walls, actually). I know this is a sensitive subject. But today, all roads led to Ollaberry. For Martha, the holidays were set to begin there.

And as we dropped off an old steam ironing press at the Bruckland SCRAN recycling centre, the cloud and haar began to lift. As we arrived at the Ollaberry Hall, just beating a bus party of tourists, the sun began to shine. And inside, a very heaven of sweet and savoury delights awaited. 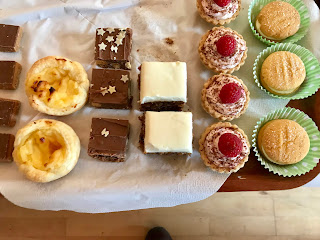 This was Ollaberry at the top of its game. From the array of sandwiches, including gluten free options, through other breads, cajun and sassermaet sausage rolls, mini pizzas, vol-au-vents, savoury bacon buns, quiches and other such pies, I tried to restrict myself and failed. But the cakes. The fancies, as they're called in Shetland...it was the delicacy and precision as much as the amount. And just when my plate was full, my tray teetering, there were the puddings... 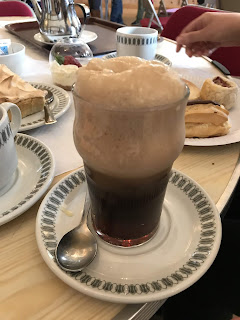 And there it was. Forget your Proustian Madelaines. A dod of ice cream in a glass of Coca-Cola and suddenly the past was rushing through the bloodstream (I had to try it) helped along the way by some unexpected Pasteis de Nata action. Because in Ollaberry, baking does not stand still. Fancies are internationally renewed, constantly reinvented.

Damn, I forgot to mention the scones, fruit loaf, home-made jam, and of course the raffle.

The holidays begin in the Ollaberry Hall. You should definitely try it. 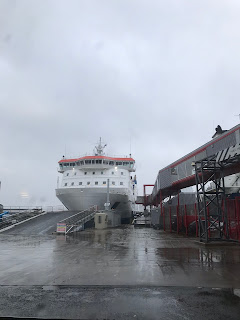 Posted by Tom Morton at 6:21 pm No comments: