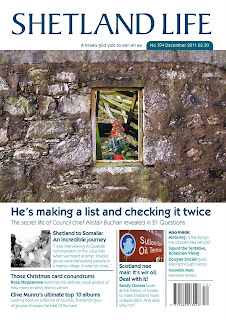 That was my Christmas present two years ago, that weather station thingy. There's a wireless connection to a screen inside, but frankly, I'm not sure how it works or what it means. The wind is always worse than the weather station says, because the anemometer is too sheltered. If it weren't, it would be in tiny pieces by now.

Anyway, this morning we had a red sky which had gone pink by the time this picture was taken. Shepherd's warning. And that's about as far as my weather predictions go... 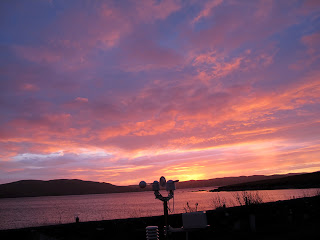 Posted by Tom Morton at 4:29 pm No comments:

The most influential album in the whole world, ever...came from Bellshill in 1969

If there was one record that set my feet upon the path of rock'n'roll, it was...Prodigal, by The Gospelfolk. Released in 1969, we had one of the first copies to see the light of day, as the lead singer, one John MacCalman, was my mum's wee brother and a hero to me and my sisters. He played the guitar. I got a guitar. He bought me my first LPs (Pisces, Aquarius, Capricorn and Jones Ltd, The Monkees, and the eponymous Taste album). He was a journalist. Eventually, so was I.

But he was in The Gospelfolk (later known as National Debt) who began as a neat and tidy evangelical pop group from Bellshill, Motherwell and Hamilton before morphing into a kind of weird amalgam of psychedelia, heavy rock and singalong Christian hymnology. They made this album in Emblem Records' tiny Strathaven studio, and we thought it was just the business. John wasn't happy with it, and you can hear why, now. It's muffled, distorted, rough as hell and, at a distance of over 40 years, utterly charming.

It's also a major collector's item, worth anything up to £1200 if you can find one in perfect condition. There's a rumour that only 99 were ever pressed, which I think is untrue. Numerous copies were sold through THE Christian outlet in Glasgow, Pickering and Inglis. I've a feeling mum bought loads to give to her friends. The lyrics are standard full-on fundamentalist rhyming, and if you want to hear them in full the whole album is available for download here . The same site features a download of the less valuable album by one Tom Morton and Mr Graeme Duffin. But that's another story. Incidentally, I don't have a copy of Prodigal. I've checked with my sisters and my sons, and neither do they. It was, if I remember correctly, scratched to bits and with a coffee-stained, torn cover the last time I saw it. Being able to view the artwork and hear it again on the web is...disconcerting. Strange. And good.
Posted by Tom Morton at 11:54 pm 1 comment: