Without bicycles, Mao Tse Tung would not have won
Even though revolution comes from the barrel of a gun
It may also come from sweaty backsides and Sturmey Archer gears
On Brooks leather saddles, which need careful breaking in, but will prove rewarding.
If you persevere. For years. In tears.

Without bicycles, Singapore would have held out in World War Two
But the Japanese had Shimano SPD cleated shoes
Which gave them a tremendous advantage  when it came to climbing hills
Though there was that tendency at first to fall off at traffic lights
As anyone will. Still. Unless you take those special pills.

Without bicycles, socialism would not have taken root in the early 20th century
As factory cycling clubs, on BSAs, Humbers, and Raleighs
Became  frenetic forums for political debate
And some participants got into such a state
That they were sometimes late,  and were thus thrown out of the factory gates.
Which wasn’t great.

Without bicycles,  delays in women’s emancipation
Would have been inevitable. But acceleration
of the process came from Derailleurs and freewheels
Symbolised by Beryl Burton, so good she  seems unreal
the greatest cyclist who ever lived, I feel. Male or female.

Without bicycles, people would all drive belching, filthy cars
The world would drown in smoke and filth, we’d be worse off by far
Fortunately, the internal combustion engine, I’m pleased to say
Remains a  science fiction fantasy today
We do not meddle with bad science. We simply pedal

Without bicycles, we’d all be horribly obese
Unfit, beset by damaged knees
From waddling with vast waists and unwanted girth
We’d be a cause for the creator’s mirth
If he or she was watching - A thought I like
God gazing down, from a Brompton folding bike.

Campaign Coffee. I remember that
Tasted like dried and finely ground Sumo wrestler’s jockstraps
Or what I imagine that to be
How would I know? Don’t look at me

It wasn’t really made from sporting genital  supports, or at least I don’t think so
Nestle donated deliberately sabotaged roasting machinery, the rumour goes
In order to inculcate an appreciation for Gold Blend and such
We sneered, and drank our horrid, morally pure sludge

But we were strangers then, to espresso. We were the uncaffeinated
Instant was all, or if you were seriously trying to impress, there was percolated
Boiled for hours, or stored, stewing on a Cona hot plate
For days and days, or weeks. I thought it tasted great

But my palate was seared, my tastebuds in a frenzy
Until the opening of the Cafe Gandolfi, owned by Ian Mackenzie
In Albion Street Glasgow, now it’s called the Merchant City
But back in the day it was anything but pretty

Motorbikes were parked inside, they served apples with digestive biscuits
But the coffee! No-one could believe Ian would risk  it
But this was proper cappuccino, potent  yet silky
Brutally Strong and yet bizarrely milky

So, anyway. After that, in Seattle something stirred
And shortly, new shouts across the world were heard
For  Machiatos,  Frappuccinos, Skinny Lattes and such
Until the flat or Dutch white arrived, and it all became too much

So that I long, now, for Campaign Coffee, that burnt, sour taste
It exists in memory only  - which seems a waste
Now we have Cafe Direct, and Fair Trade Nestle too
I suppose it shows what campaigning can do

You can buy green beans, and roast them at home
Knowing that they were fairly and justly grown
Blue Mountain, Ethiopian Yrgacheffe, Monsoon Malabar
Who’d’ve guessed we’d ever come this far?

From rooms where people were allowed to smoke
Handrolled Golden Virginia - no, that’s not a joke
Talked politics long, long into the night
And drank Campaign Coffee, which tasted just like...

Posted by Tom Morton at 8:12 pm No comments:

Very curious. In the (with hindsight) odd and innocent world of early 1970s Scottish evangelical folk and rock (now THERE'S a niche!) Paul Openshaw was someone spoken of with reverence and a degree of awe. He was the first person I had ever seen who owned and played a Dobro (a proper one, too, none of your imitations). Always the best of we strummers and pickers, the most questing, and the most dangerous and adventurous in songwriting. By the time we met and he was playing University Christian Union gigs, he was slipping away from Godworld, and describing the experience in painful, devastating songs such as Backslider. Which, to say the least, confused the unregenerate Plymouth Brethren among us.

He was at agricultural college, I think, down near Ayr. And then, he was gone. A decade later, so was I. And then, nothing until a few contacts via Facebook over the past year. Paul appeared to be in Dorset, involved (at a senior level? - I don't know) in agricultural feed production. And not only still performing and playing, but, as far as I could tell, still regarded with reverence and awe in his locality.

Yesterday an album arrived called The Potting Shed. Just acoustic guitar  - DADGAD tuning - and some funny, acerbic, sometimes very moving and powerful songs. That voice, slightly smoothed out and less ragged and scratchy than back in the day. And the only album I've sat down and listened to twice through in succession for, oh...a long time.

The guitar playing was always great. Now it's world class. Some internet investigation  - and it seems Paul lives a life below the Google radar, for the most part - indicates that he's a bit of a guitar guru these days, conducting seminars on his approach to tuning.


No idea how you can get the album. There are only 200 copies and Paul's website  - paulopenshaw.com - doesn't work. If you're in Dorset, look out for him at pubs and festivals. However, I did find this on the Acoustic Guitar Magazine site, and some of the songs here are not on the album. A couple deal with the distant past I've talked about. They are wonderful. 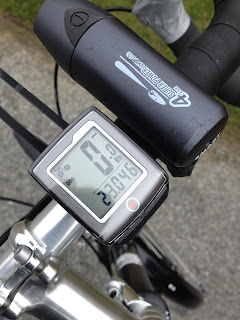 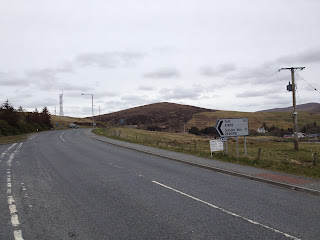 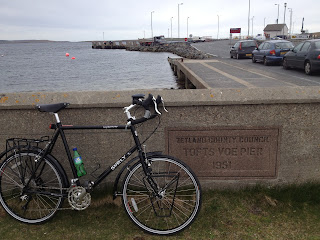 Everything is coming together for the Mull2Muckle/Fairly Long Ride, which pedals off officially from the Mull of Galloway lighthouse on the evening of 8 June. But today, I started with the first 10 miles. Plus 13 for luck.

I'm taking a week off broadcasting to do the mainland Scotland section of the ride, but I'm back on air (and hopefully in Shetland) from Monday 18th June. Idea is to get to the most northerly point in the UK (we'll settle for the accessible-by-bike Muckle Flugga lighthouse shore station) on the longest day of the year, which is Wednesday 20th. Cycling and then being whisked back to Lerwick for the radio show doesn't really work easily, so I'm trying to knock off chunks of the Shetland route in advance. Useful, uh, training too!

On Tuesday 19th I'll cycle from the Unst ferry terminal to Baltasound, and stay there overnight, cycling up to the Muckle Flugga shore station either first thing in the morning or for midnight!  There will be a live link up with the Fred Macaulay Show on BBC Radio Scotland, then I'll shoot back to Lerwick for my own programme.

Anyway, I need to cycle the Shetland  section of the route before I go off to start the bit awa' sooth. That's 18 miles from Lerwick to Voe, 10 from Voe to Toft (Yell ferry terminal - there are three big islands in the Shetland group, Mainland, Yell and then Unst at the top) then the 18 miles across Yell. Today I did the 10 miles from Voe to Toft, with another 13 added in for training purposes (actually, to get back to where I'd left the car).

And it was fine. The run from Voe to Mossbank is a  series of dips and then a long slow climb (see it at BikeHub here) to 300 feet above sea level above Dales Voe, on the A968, Britain's most northerly A road. Then there's a ferocious descent (hitting 40mph according to my new cycle computer) down to Mossbank, and the site of the new Laggan-Tormore gas pipeline's landfall, followed by a corkscrewing climb and a series of dips'n'rips until the Toft terminal appears. First 10 miles of the Mull2Muckle done (see pictures below). Then I simply retraced my derailleur-crunching to Voe, including the dreadful (3-4 mph) ascent from Mossbank. I'd left the car back along the road to Brae, which accounts for the extra three miles.

All done on muesli, oatcakes and dried apricots! Weather (it was cool, dry, dull and slightly breezy from the east) permitting, I'll tackle Lerwick to Voe this week, with the Yell section next weekend.
Posted by Tom Morton at 4:04 pm No comments: