Letter to The Shetland Times and Shetland News


Just some points of information for Shetland Islands Council's Transport Operations Team (TOT) and its leader, David Polson, regarding the proposed closure of the Viking Bus station and freight centre.

1 - You work for Shetland Islands Council, not Lerwick Town Council. 'Shetland' is a very scattered rural community and maintaining its public transport network is absolutely crucial.

2 - Some people don't have cars. Indeed, some folk are thinking of giving up their cars, especially in  view of yet another proposed increase in fuel duty

3 - There are people in Shetland who are elderly, poor, young or who choose not to pollute the atmosphere with gigantic pickup trucks or executive sports saloons. They depend not just on buses to get to and from Lerwick - some of them even work in toon, possibly for the disgracefully centralised council - but on the Viking Bus station. They can leave their shopping there, lock up their belongings. They can have a seat. They can use the toilets, arrange for parcels to be sent to the bus stop nearest home. they can - and I know this is a novel concept - wait for buses.

4 - Tourists sometimes come to Shetland. I know it seems odd not to wish to fly to Tenerife or visit your holiday bungalow in Florida, but not everyone has the glorious and secure income supplied by the SIC. Some of these tourists don't bring their cars. They like using public transport. The Viking bus station is Shetland's 'public transport hub'. Again, a strange concept for a Transport Operations Team to get its collective head around. But there you go

5 - Yes, 20 pence a parcel for bussing goods about Shetland is a ludicrously low price. Quadruple it. Quintuple it, it's still cheap. Raise some money. Earn some money.

6 - Closing the Viking Bus Station would save what is the cash equivalent in annual wages of two junior SIC managers. While eradicating two jobs.

7 - As far as I remember, at no time during the extensive public consultation carried out by the previous council on savings was anything as downright ludicrous, contemptible and contemptuous suggested.

Councillors will meet on Friday to debate this ridiculous report. Unanimous rejection of it is the only acceptable outcome.
Posted by Tom Morton at 9:30 am 2 comments:

Paradise by the Spittoon Moon...

...my new column in The Caledonian Mercury is online, and is all about my reluctance to actually taste 22 of the best whiskies in the world... 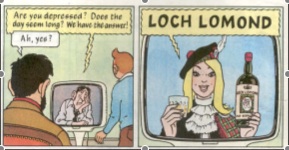 You can buy Loch Lomond whisky via Amazon here:

However, the item description indicating that the whisky 'has been made in Loch Lomond for 180 years' is a trifle dodgy. The Loch Lomond Distillery in Alexandria was converted from a dye works in 1963.
Posted by Tom Morton at 8:49 pm No comments: