Food Memory betrayed: Jacob's Club, ruined by the French, reclaimed by the Irish

Food memory. It’s a funny thing, our ability to recall the shape, texture and taste of  particular foods. Childhood taste experiences not only resonate down the years, but influence our adult food choices. We seek out the morsels which recreate past, innocent pleasures. 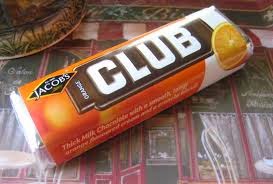 And sometimes, food memory deceives. Of late I’ve been eating Jacob’s Club Orange biscuits reasonably often, for one simple reason: my wife hates them, and so does my daughter, who was home for the summer. Therefore I could guarantee a secure supply of sweetmeats was lurking in the fridge when I came in from my daily grind of mild dogwalking, in need of a snacky sugar rush.

Memory played its part, of course. Club biscuits were as near a chocolate bar, a proper sweet, as you could get when I was a child in the 1960s, and cheaper than a Mars or a Crunchie.

But I’ve gradually become aware that the Club Biscuit is different these days. I always recall it as squat, brick-like, very chocolatey, very crunchy. It still has a hint of that that, but it has definitely slimmed down. It’s thinner,  there’s less chocolate. I didn’t realise the reasons for that, or that the Club is mired in fear, loathing, hatred, anti-French sentiment, anti- (and pro-) Irish sentiment.
It all starts in Ireland, where, just prior to World War One, WR Jacob started producing the ‘Club Milk’ biscuit from a tiny bakery in Waterford. They quickly moved to Dublin and grew. It was a classic format: two biscuits, sandwiching cocoa cream, surrounded by thick layer of milk chocolate, wrapped in foil and then a slip wrap of paper. Within a year it was being made and marketed in the UK, from the company’s Liverpool factory. By the 1920s, the UK and Irish branches were operating separately. 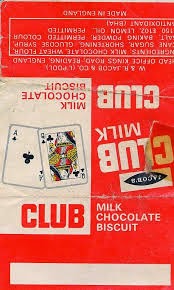 The range expanded (orange, fruit, mint, plain, even a honeycomb version ) and became hugely popular in the UK, until in 1970 the Irish and British divisions of Jacobs were separated. If you’re old enough you may still remember the ‘playing card’ packaging used for the original biscuit, which provided the name ‘Club’ in the first place.

‘If you want a lot of chocolate on your biscuit, join our club.” The jingle was everywhere and there WAS a lot of chocolate on a Club. You could nibble it off leaving the biscuit layers shorn and naked. Oh, and despite many west of Scotland jokes, Orange Clubs had and have no sectarian connotations.
Disaster struck in the mid 1990s when French firm Danone bought both the Irish and British branches of Jacobs. They changed everything: The packaging (no foil, no paper, just cellophane) and the recipe. One biscuit, less cocoa cream, a different, thinner layer of ‘chocolate-based coating’. There was outrage. Sacre Bleu!

In 2004 things got complicated. Danone sold the UK arm of Jacobs to United Biscuits who reinstated the packaging but left the skinflint French single-biscuit recipe intact. The Irish arm was sold to the Fruitfield Group, and Jacob Fruitfield Foods was formed, who are now marketing the original Jacob’s Milk Club, made exactly according to its full-thickness, double-biscuit, real chocolate recipe. There are stories of legal action in Ireland to stop cheaper (and inferior) biscuits being imported. And Jacobs in the UK are apparently in frequent legal ‘communication’ with Jacob Fruitfield over the use of the name on a number of other lines (like Cream Crackers, for instance; you can see how confusion could arise). Then in 2014 United Biscuits was acquired by Turkish group Yildiz for a reported  £2bn and is run by a division of the business called Pladis, whose other brands include McVitie’s. Last year (2018) there were reports that the Jacobs biscuit factory was for sale.

As for availability of the ‘Original Milk Club’ in the UK, I know nothing, though I am hoping to source some next month during a trip ‘across the water’. No double wrapping, though, if the pictures are anything to go by. 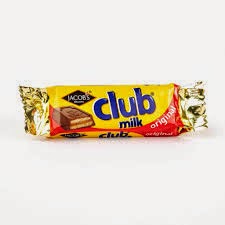 In 2008, the massive old Jacob’s factory in Tallaght, Ireland, closed, although biscuits are still being made elsewhere. As for Jacobs in the UK, I have my Orange Club, and I quite like them. The thing is, before researching this piece, I had no yearning for the old, higher, double-sandwich, real chocolate pre-Danone version. My food memory had been traduced.

Now I want them back. Now I remember.