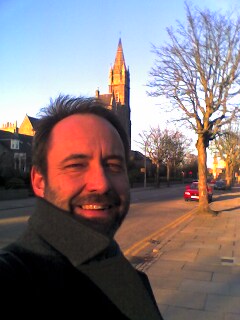 There was a choice: Hire a car ("£270 including the excess insurance, sir"), which would have been convenient for the impending week in and around Glasgow and its nearby loch, or grit my teeth and embrace bicycles and buses.
Thing is, Susan's already down there with a Toyota Corolla Verso (thanks, Jim), a double bass and several weans. We don't need two cars on the mainland, and besides, I'm not insured to drive the Toyota, which means that on any social evenings in the vicinity of the River Clyde, not to mention James's apearance with the National Children's Orchestra, I may be able to partake of a small libation.Now that the Atenolol is kicking in and my blood pressure is back to normal. Approximately.
I bought my own blood pressure monitor (£12.99 off eBay) and oh, what fun it is to test oneself in varying circumstances (let's see...just back from seeing the excellent Spike Lee film - and it truly is a Spike Lee film, let no-one tell you otherwise - Inside Man, and it's shot up to 131 over 97, which is crap, actually; diastolic was down to 83 earlier on). Ah well.
Anyway, I've hired a bicycle for dotting about to trains and buses down in the Great Corruption that is Glasgow. And tomorrow I do that Megabus thing (£8.50 return) to get out of Aberdeen. Which is damp and dreich, dreich, dreich at the moment, though yesterday evening (see picture of me via phone) was gorgeous, golden and heavy with the hope of spring.
Yesterday was actually spent mostly in Elgin, Radio Scotland's current Soundtown. The show came from Elgin High School, and one of the school's several rock bands, Envoy, played live. There's a snap here of the lads setting up. 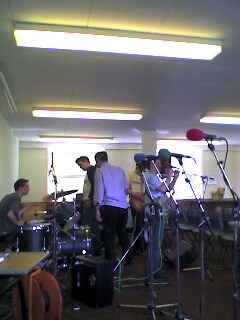 Cycling is something I've never quite stopped doing, and now I feel it's time, for many reasons, to commit myself to it as a mode of transport. One, it makes me feel good, and always has (something to do with that first, stabiliser-off lurch of freedom way back when); two, it'll help me get fit, and three, I'm planning a mammoth charity ride later in the year. This will be in aid of the Shetland CAT scanner appeal. All will be probably be revealed in due course.
It's time to get rid of the motorbike and for that matter motorbiking. I thought having the Harley would be a kind of "mature" way of coping with that adolescent urge to get my motor running, head off on the single track highway. But frankly, it's stopped doing anything for me. But frighten the living the daylights out of me. True, pushbikes face dangers on the road too, but the statistics fairly and squarely convince: old men on motorbikes are accidents waiting to happen; old men on pushbikes (on Sustrans cycle routes) probably just have high blood pressure. And I'm sick of petroleum products.My carbon footprint is the size of a diesel elephant's.
All of which will be hugely ironic if I get killed or maimed cycling around Glasgow next week. I'll try not to.
Posted by Tom Morton at 11:51 pm

ah wish you the best o'luck cycling roon glesca tom you're a better man than me gunga din, ah've always loved the bike as well but nooadays ah keep it tae places like the road roon loch katrine or the canals roon falkirk wheel, anywhere in fact that caurs don't go.
but if you get mashed by a bus can ah get your brilliant digital camera?
tata the noo
colin