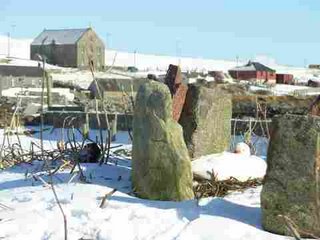 What a day! After all that moaning about the snow, what happens but the warmest day of the year, so far, but WITH SNOW! It's the first time in years I've seen the snow glittering. I was out and about earlier this morning, dressed in t-shirt and light pullover (yes, OK, and trousers) and I could feel the sun hot....well, warm...against my face. It's also flat calm. After the darkness and howling gales of the winter, it's just fantastic.
On a wee drive up to Eshaness, I saw Foula dressed in white for the first time ever. Foula being the most westerly Shetland island, allegedly the model for Tracy Island in Thunderbirds (only in the Caribbean, obviously) and identified by the Romans as Ultima thule, or the edge of the world. I've been there, and it's an extraordinary place, with the highest sheer sea cliff in Britain and some unsalvaged remnants of wartime aeroplane crashes. 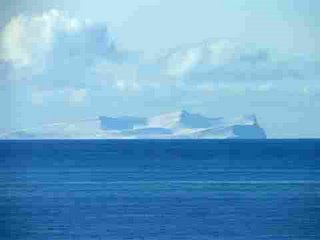 One of the geese has, for the past fortnight, been sitting on a clutch of eggs right in the middle of our Stonehenge/Callanish/Brodgar flower bed. She knows it's spring!
Enough typing! I have blood pressure to reduce and snowmen to build. Oh, and work to do as well. Also golf clubs to clean and restore, but that's another story.
Posted by Tom Morton at 11:14 am