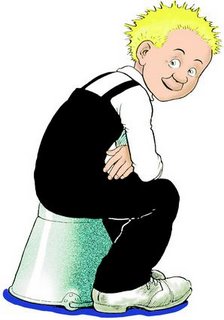 ...help ma boab, etc. It was Oor Wullie's 70th birthday yesterday, and I seem to have spent most of the week being interviewed about it. There are/were features in The Scotsman, Daily Record, on Grampian TV, Reporting SCotland (BBC1) and on oor ain BBC Radio Scotland. Everyone's in a particular lather about the anti-Nazi strips during WW2 and the...ahem...supposition that writer and arist RD Low and Dudley D Watkins were on some kind of Nazi hit list.
Yes well, maybe. Fact is that almost all cartoon strips during the war years contained some kind of propaganda - most notable perhaps the Superman/Green Lantern/Batman DC strips in America, where the superheroes actually went to war. It is a matter of record that Albert Barnes, wartime editor of the Dandy, and George Mooney, who ran the Beano WERE found to be on Nazi target lists, as a result of strips like "Adi and Hermy, the Nasty Nazis".
This is being discussed today on BBC Radio Scotland's Radio Cafe (1.15pm) and tomorrow on the Fred MacAulay Show (around 10.00 am. goodness knows what the Sunday blatts will do - though their enthusiasm for Oor Wullie may be curtailed by the annoying knowledge that Wullie's home, The Sunday Post, still sells a colossal 600,000 copies a week.
Crivvens!
- Happy Birthday Wullie is at 9.00 pm on Friday, BBC1 Scotland
- Click down two posts and have a listen to Oor Wullie - The Musical
Posted by Tom Morton at 12:33 pm

Half_Fool said...
This comment has been removed by a blog administrator.
3:59 pm

What Scottish child with reading capability hasn't read Oor Wullie?
Why is it still so popular after all these years?

I believe a large reason for the continued widespread readership of this comic, is its cultural status.
It's almost like a torch handed from father to son, big brother to wee brother, cousin to cousin and so on.
It's an integral part of US. Who we are. We Scots. Inwardly we know it. So we pass it on, we keep reading, we pass it on.
Another icon aside from Tarten, Fitbaw, Gettin it up the Inglish, Haddock and Chips with Pickle, A Pint of Heavy etc. etc.
It is aside because it's always good clean fun, it is and always will be. A slice of childhood that is always there (to come back to).
That knowledge is comforting.